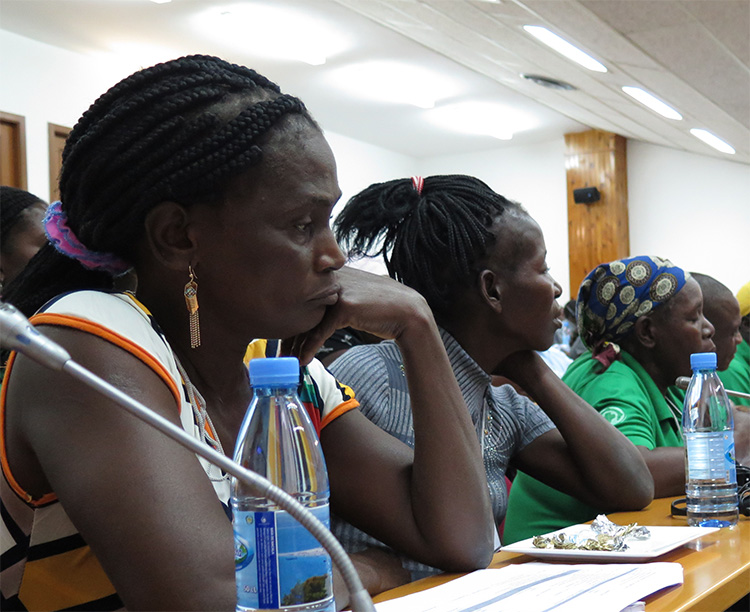 (Mozambique, Maputo, October 1, 2014) Lack of access to markets by women farmers to trade their agricultural produce leads to the sale of their produce at low prices, and the seizure of their lands by mining companies are some of their main concerns raised during the III International Conference of Farmers and Soil, held in Maputo. The event attracted several movements including women farmers from the northern, central and southern regions of the country and the representatives of the Ministries of Agriculture and Technology.

In almost all provinces, they rely on agriculture to support their families and they face many difficulties in doing so. According to Rita Rizuane, farmer leader and member of the Board of Directors of the UNAC, one of the current concerns is related to the lack of access to markets for their agricultural produce nationally and regionally. Thus, some of their products particularly crops such as tomatoes spoil easily, resulting in the loss of income as farmers are forced to sell their products at very low prices.

“Our products are rotting in the district of Chiúta where a basket of tomatoes, which holds about 4 cans filled with tomatoes costs only 50 Meticais ($1.50). The government has to create conditions to improve access to markets. We work hard and profit little, for we produce but sell at a low price,” lamented Rizuane.

In the central region, grabbing of land occurs without consultation with and consent by local communities. According to Helena Terra, the Vice-President of the Provincial Union of Farmers in Zambezia, in the districts of Ile and Namaroi about 180 hectares of land were taken by the company, Portucel, for the production of eucalyptus and pine. No consultation with the farmers was done before the land was taken.

“When farmers seek to know how the lands were occupied, just show them documents that they will not understand. As such the farmer is treated as nothing, “said one peasant woman.

According to the President of UNAC, Augusto Mafigo, the country needs a serious agrarian reform to remedy the violation of the farmers’ rights of use and access to land. Land usurpation is a prevalent issue all over the country, especially in the provinces where the Pro-Savanna is being implemented.

Tete province remains a concrete example, since only in Changara district there are about 540 families who are waiting for resettlement. The Indian company, Jindal, is using open cast method to explore coal in populated areas. It should be noted that most of this area (Tete) was concessioned to mining companies and thus free areas for resettlement are limited.

To Rebekah Mabui, Vice-President of the Provincial Farmers Union of Maputo, the land attracts many people to Mozambique, particularly from the south. The concern is that people who come from outside exploit the land and ignore the knowledge of the local farmers. The coastal areas of the southern region, in particular the provinces of Gaza, Maputo and Inhambane, are examples of places where the local population is excluded to use land.

“The beaches are occupied by foreigners and the local population that has always lived there is becoming increasingly poor, yet on the other hand the law says that agriculture is the basis for the development of communities,” said Mabui.

Besides the challenge of land grabbing, the environment damage prevails. The representative of the Provincial Union of Farmers in Zambezia stressed that the communities and rural women continue to suffer due to environmental pollution, a product of the extraction activities by mining companies. For this reason, women are afraid to use water since this precious liquid has been contaminated and unfit for consumption by local communities.

“In Tete province, the explorer companies use chemical substances which pollute the water making it unfit for drinking, and even cause death of animals. The local population cannot eat the meat as it is contaminated. The air pollution caused by coal mining also kills animals “he explained.

Besides the demands from the women farmers in relation to their rights of use and access to land, they hope that the government will create conditions to enable them to access credit. The seven million fund from the banks is not readily available to farmers, which claim that agriculture is a risky business to invest in.

Other demands of farmers included the provision of means of production, agricultural inputs, processing machinery, increased extension staff to assist farmers at grassroots level as well as access to subsidized credit.