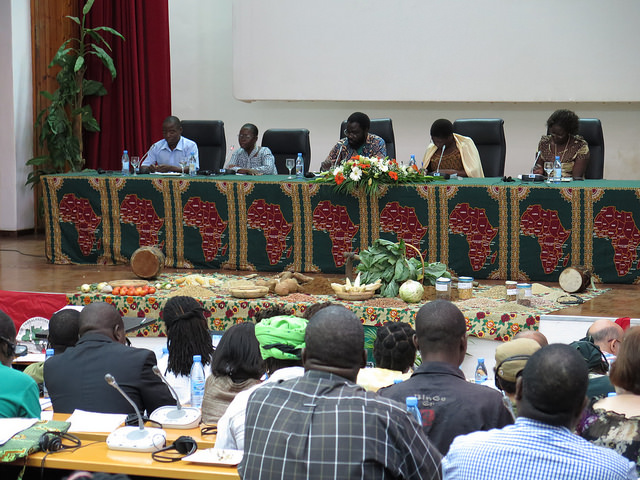 (Mozambique, Maputo, October 1, 2014) Farmers’ representatives of the National Union of Farmers (UNAC) reiterated their rejection of genetically modified seeds which present a number of disadvantages. According to the participants of the III International Conference of Farmers, hybrid seeds which are circulating in Mozambique have shown inefficiency primarily because farmers are forced to buy new seeds every season.

These remarks were made in response to the two interventions by the government officials, particularly those from the National Directorate of Agrarian Services and the Ministry of Science and Technology, who talked about an effort from the government of Mozambique to adopt strategies against climate change.

In the Government’s view, the issue on climate change requires the adoption of improved seeds or genetically modified seeds despite their known challenges. Carlos Santana from the Ministry of Science and Technology indicated, in detail, that there is a set of measures in place for a better implementation of these organisms. He explained the government’s biotechnology and phytosanitary issues and that there is a need for the government to implement the use of hybrid seeds (such as WEMA-Water Efficient Maize for Africa) in line with what has been strategized with other governments in the region.

In the Mozambican government’s view, the need for hybrid seeds must not be seen only as a way of benefiting the multinationals, but as a response to climate change. Thus, it argues that there should be a public participation of farmers in this process at a local level.

However, the UNAC represented by Agostinho Bento showed its displeasure against what he called a lack of sensitivity and violation of the rights of the farmers to produce and maintain the genuine seed.

Shock of the farmers

The explanation given by the government about the introduction of genetically modified seeds was not well received by the farmers and did not give room to their plea. In the entire discussion, many participants voiced against the explanation given by the government and asked the leaders to not only think in profit terms but also the health and welfare of its people. During the open debate session, the farmers seemed annoyed because they do not want to use modified seeds which do not have quality.

Farmers promise to push the government

The focus of the farmers was towards making a peaceful petition to the government to discourage the use of Genetically Modified Organisms. The Matuba corn has been the centre of argument and many farmers have been complaining about its lack of quality, and thus has led some districts of Nampula province to reject this type of seed.

José Mateus, from the Farmers Union of Manica questioned the policies which have promoted the selling of seeds that have not shown satisfactory results all over the country. The government official, in response, said they had clear instruments governing the marketing of seed in Mozambique and that what is needed is a complaint and in case of irregularity to look into the issue.

The representative of the Environmental Justice (JÁ), seemed to be dissatisfied with the approval of the Regulation on GMO’s because it signifies openness to use of such seeds. Therefore, he called for greater disclosure on the disadvantages of using GMO’s. Many criticize the government for the proliferation of genetically modified seeds. Yesterday the National Assembly approved the legislation on biotechnology and this will surely promote the development of this market.