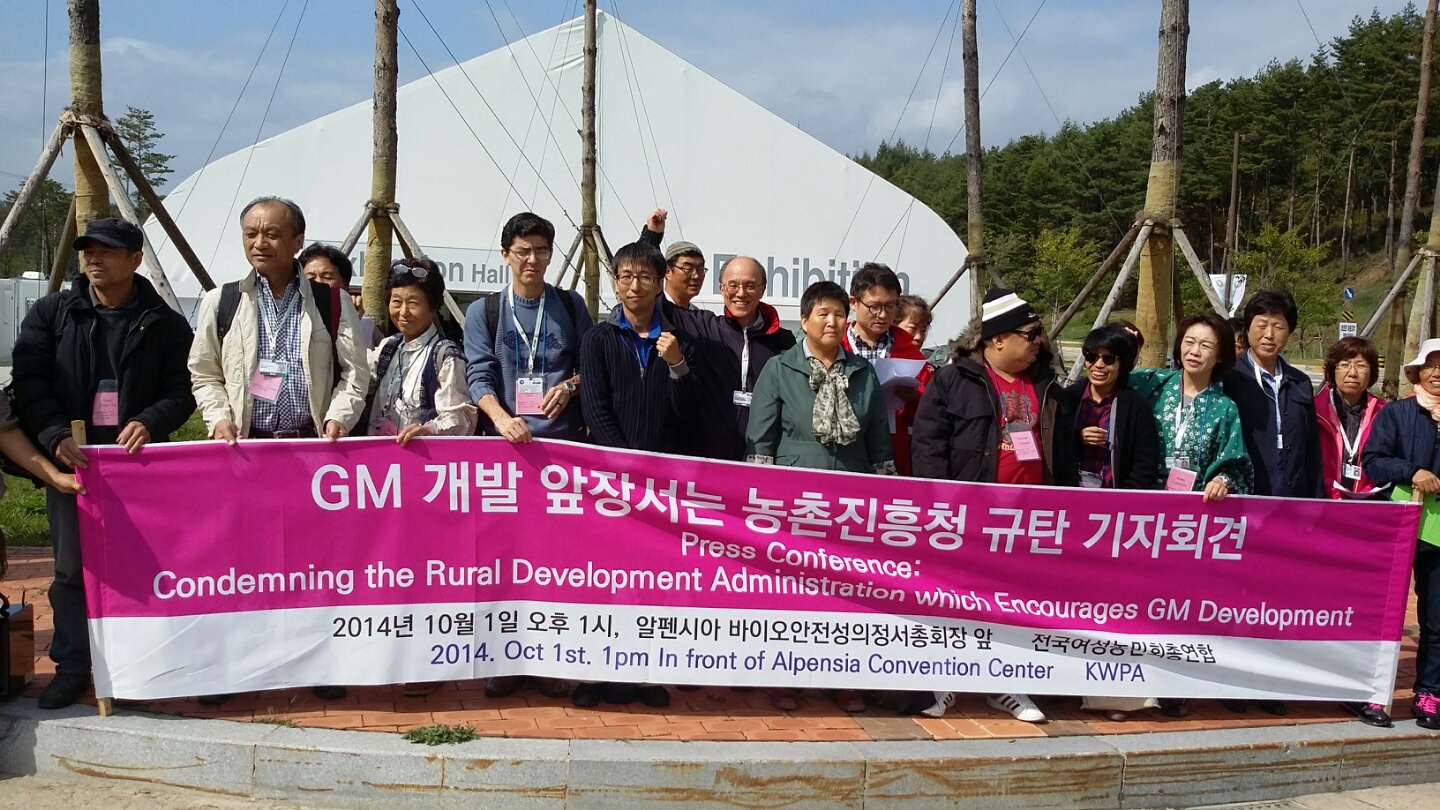 (Pyeongchang, Korea, October 1, 2014) The CBD COP MOP7 (the 7th Meeting of the Parties to the Cartagena Protocol on Biosafety), which started on September 29th, is being held here in Pyeongchang, Korea. Right in front of the conference venue, there is an exhibit of GM fluorescent silkworms that have been developed by the Rural Development Administration. These GM fluorescent silkworms, the subject of a Rural Development Administration study in 2011, were created from the eggs of silkworms into which genes from South American jellyfish were injected; these genes give rise to fluorescence green silk thread. As the Rural Administration has a plan to diversify the colors of silkworms, the GM green fluorescent silkworms are just a beginning. Last February, the GM Commercialization Team organized by the Rural Development Administration held a discussion meeting on how to apply agricultural biotechnology. When describing the national and international situations with regard to GM crop commercialization, they made ludicrous remarks, echoing those of GM developers in the US, such as “GMOs mean less pesticides”, and “The US would not have grown GM crops if there were any danger to the environment from GM crops”. There was a great deal of criticism from farmers’ organizations and civil society organizations. At the very moment that we are speaking, there is ongoing GM development in Korea, and the volume of imports of GMOs for research and study is growing.

We, women peasants from all over the country, have gathered here in Pyeongchang, to raise our voice in opposition to GMOs and to support the struggles of the farmers who are preserving indigenous seeds.

For Whom are GMOs Developed?

The Rural Development Administration Must Fulfill its Duty as an institution for Food Sovereignty and Farmers, and not for GM Development!

The Rural Development Administration has established as its key goals for 2014 the stability of national food supplies and the sustainability of agriculture and farming villages. Hence, what the Administration should be actively pursuing is the stable provision of safe food to people through the development and dissemination of agricultural technology that preserves biological diversity. Because of our concern about the lack of guarantees that GMOs are completely safe for humans, this past year we have promoted the putting into place of a complete GMO labelling system, in order to ensure the right of people to know and to choose. GMOs have not been found to have positive effects on agriculture nor with respect to human health. To the contrary, the production costs of GMOs go up, and there was a tragic case where an Indian farmer committed suicide because of pressure from the his growing debts. Furthermore, the accidental spread of GMOs can contaminate both our native seeds and the food that is being safely produced using agro-ecological methods.

Acting in solidarity with the Life Network and other civil society organizations that are opposed to GMOs, we, women peasants, have continued to express our concerns regarding the uncertainty of GMOs, and their possible effects on humans and on the eco-system. A number of media have reported that GMOs prohibited from being grown in Korea have been found growing in the wild. However, there has been no acknowledgement of accountablility on the part of the government or any other agency, and they have not proposed any alternatives or solutions. In addition, last August, there was a reported case of a food product whose label did not indicate the presence of GMOs even though the product contained GM ingredients. Korean people, including farmers, have the right to be informed and to choose healthy and safe food. It is only with the support of government policies that it is possible to establish the foundation for the production of safe food.

Therefore, we express our firm demands:

The Rural Development Administration must promote the rights of farmers who preserve indigenous seeds and who practice sustainable agriculture! Women peasants from all over the country will continue to protect our land and our indigenous seeds, which are being contaminated by GMOs. We also ask for the enactment of laws to guarantee the rights of farmers. The real alternative in the fight against the ever-worsening food and climate crises is the implementation of food sovereignty. We demand that the Rural Development Administration stand together with farmers in their efforts to have a sustainable agricultural system and to preserve food diversity, and that it plays a leading part in increasing food self-sufficiency.