AGAINST GMOs which Destroy Biodiversity and Rob Peasants of their Rights! ENSURE Peasants’ Right to Save Indigenous Seeds and Maintain Food Safety! 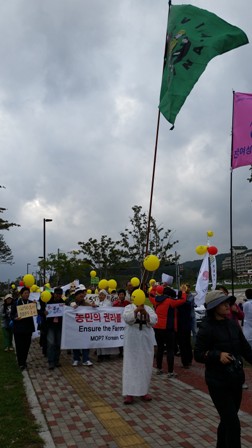 (Pyeongchang, Korea, October 2, 2014) MOP-7 (the 7th Meeting of the Parties to the Cartagena Protocol on Biosafety) is being held in Pyeongchang from September 29th to October 3rd. We are here to address the government delegations of all of the countries, on behalf of the peoples of the world.

We are against GMOs, as they only benefit a few corporations and capitalist interests!

GMO seeds only exist to benefit a few corporations. GMOs were invented solely as profit-making products. It is claimed that GMOs are the result of scientific hybridization technology that has been developed in order to solve the food and climate crises. However, these assertions are not true. GMOs destroy biodiversity and people’s livelihoods. Moreover, transnational corporations try to gain a monopoly over seeds by means of intellectual property rights and patents. However, it is the hands of peasants that have nurtured seeds, and it is the right of peasants to have access to seeds and control over their use.

We are opposed to all types of development and commercialization of GMOs carried out by transnational corporations. At this time, it is really urgent to safeguard indigenous seeds and maintain their sustainability. The immediate challenge is to rediscover biodiversity and the diversity of local communities, so as to prevent their disappearance.

In every country, governments are siding with corporations that deprive peasants of their right to seeds and to maintain biodiversity

Governments in every country are enacting laws to deprive peasants of their right to seeds but to guarantee the profits of transnational corporations. Governments are passing laws that curtail and criminalize the right of peasants to have access to seeds and their free use. In cases of GMO contamination, there are no legal provisions for assigning responsibility and providing compensation to peasants. For instance, the United States as one of the largest producers takes the lead on GMOs but has not ratified the Cartagena Protocol on Biosafety. We demand changes in public policy in every country and the enactment of laws to guarantee the right of peasants to save indigenous seeds. Every country that has ratified the ITPGRFA (International Treaty on Plant Genetic Resources for Food and Agriculture) must protect the rights of peasants stipulated in the treaty.

The right of peasants to protect indigenous seeds is inviolable. The rights attached to the indigenous seeds that we have protected over long periods of time belong to us. Therefore, all of the international treaties and national laws giving possession of seeds to individuals and enterprises – in the name of intellectual property rights and patents – should be abrogated. Also, in Korea, even though the cultivation of GMOs in any part of the country is prohibited, there has been GMO contamination that has caused damage to peasants and has endangered the ecosystem. This is not only a Korean problem. We are opposed to the presence of GMOs on our land; the countries and companies that are involved in exporting GMOs should be held responsible.

We have the right to know, and to choose where the food we eat should come from and by whom it was grown. All agricultural products that have been genetically manipulated should be clearly labelled. This requirement should not only apply to agricultural products; the public should also be entitled to open information regarding all types of GMOs affecting their lives. Furthermore, there needs to be consideration of the social and economic effects of GMOs. Every country should examine the various ways in which GMOs influence our lives. We will never permit the threats to life, health, and the environment that are caused by GMOs.

We want a world free of GMOs. We will maintain and put into effect our international solidarity, in order to advance towards a society in which biological diversity is revived, and ensures the sustainable future of the Earth.

Our seeds are our future! We are the new society, the seed of change!