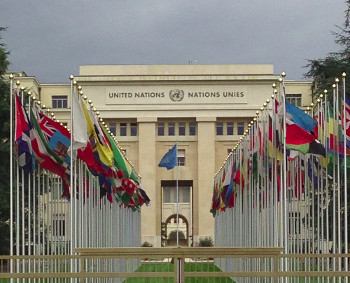 (Geneva, October 5, 2015) On the afternoon of October 1st 2015, the United Nations Human Rights Council adopted by majority a resolution where it decides that the open-ended intergovernmental working group, with the mandate to negotiate, finalize and submit to the Human Rights Council a draft United Nations declaration on the rights of peasants and other people working in rural areas, shall continue the process for the next two years.

The resolution was presented by the governments of Bolivia, Ecuador, Cuba and South Africa and sponsored among others by Switzerland, Brazil, Eritrea and Argentina, in a joint effort from all regions to support this decisive step. In the final vote, the US government was the only one to vote against. The governments of Europe have abstained from voting and have continued with the same bloc-voting position as in June 2014, in the vote on resolution 26/26. In total, 31 countries voted in favor, 15 abstained, and only one voted against.*

La Via Campesina, an international movement which brings together more than 180 organizations from around the world and that represents approximately 200 million peasants, has together with FIAN and CETIM, taken a historic momentum to this process by positioning for the first time within a UN mechanism, a project intended to fill the gaps in human rights legislation of the rural population and rural fishing communities, nomadic peoples, pastoralists, rural workers, landless, rural women and indigenous peoples. The current draft statement submitted by the government of Bolivia in Geneva in February 2015 during the last working group, advocates for a universal charter containing a set of rights in order to improve the conditions of those who live in rural areas and produce 80% of the food in the world.

In the days before the vote, leaders from all continents were present in Geneva in order to alert governments about the growing conditions of exclusion, land grabbing, repression and criminalization faced by peasants’ organizations and the devastating effects of agrochemicals on the health of rural and peasant population. Meanwhile, national organizations supported the work done in Geneva by carrying out lobbying activities in the capitals.

La Via Campesina and alliances redouble efforts to demonstrate that there is no North-South division in the violations of the rights of the peasants’ population against the reluctance of many northern states to accept the need for such a statement. La Via Campesina advocates for a model of peasant agriculture in both the North and the Global South based on agroecology and equal relations between peasants.

Finally, La Via Campesina wants to express its deep appreciation to the Governments of Bolivia, South Africa, Cuba and Ecuador for their continuous efforts within the Human Rights Council to carry out this initiative emanating from the peasant movement, highlighting an example of good governance, dialogue and involvement of farmers’ organizations, civil society and governments.

* Results of the vote on the resolution