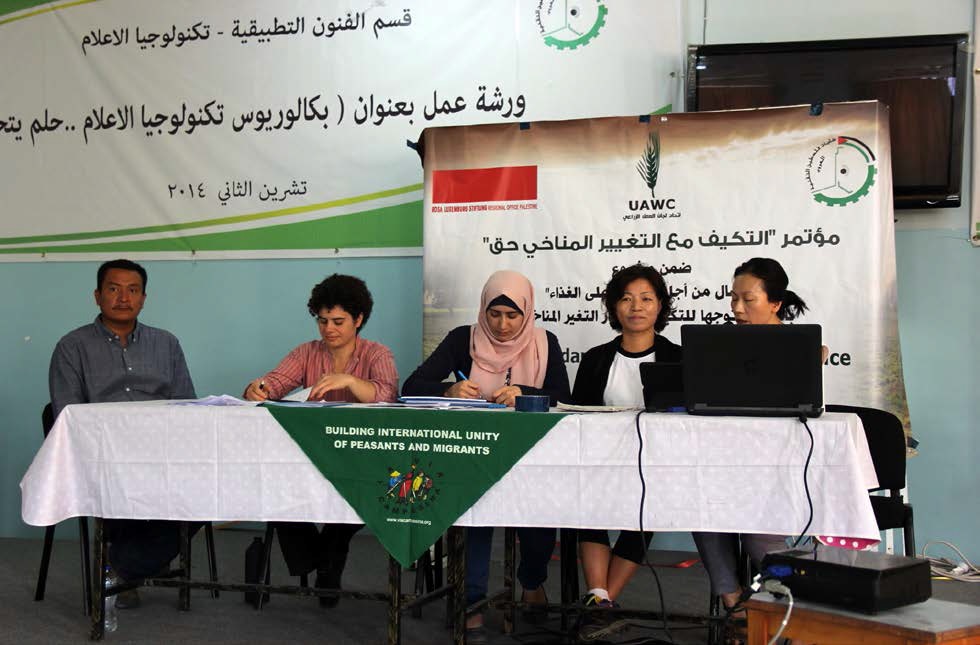 (Ramallah, October 6, 2015) the Union of Agricultural Work Committees organized a conference about climate change adaptation and mitigation strategies in cooperation with the Palestine Technical CollegeArroub in the governorate of Hebron A delegation from the international peasant movement (La Vía Campesina), Grassroots organization, representatives of local NGOs and members of agricultural committees and women’s cooperatives attended the conference.

The conference focused on different topics such as global climate change, food sovereignty, Palestinian policies, agricultural sector challenges, and roles that youth play in tackling climate change, as well as climate change impacts in Palestine especially in the light of the Israeli control over Palestinian natural resources.

UAWC’s acting director, Fuad Abu Saif, stressed on the importance of unification of efforts to conduct a national plan for climate change adaptation pointing out that the climate change is highly related to food sovereignty principles, especially in Palestine Program Manager at Rosa Luxemburg Foundation, Issa Rabadi, pointed out that this conference comes within “Struggling for Food Sovereignty as an Orientation for Mitigate Climate Change Impact” project which aimed at promoting international climate and food sovereignty alliances involvement in advocating for Palestinians right to food sovereignty. George Korzum, the environmental expert, introduced his topic about food sovereignty concept, its contradiction with “food security”, and its compatibility with anti-globalization. As well as, he illustrated the relationship between food sovereignty and resistance economy, which is mainly based on the principle of recycling of capital inflows within the country. Furthermore, He explained the methods used to encourage the Palestinian farmers to replace traditional crops with commercial crops, mainly for export.

In the same context, UAWC concluded its activities with a round table discussion attended by civil and governmental institutions, farmers and agricultural associations in addition to the delegation from the international peasant movement (La Vía Campesina) and Grassroots organization, where the discussion ended with recommendations for climate change adaptation.

These activities come in the light of UAWC’s national and development role in empowerment of farmers and their families and strengthen their steadfastness, thus creating agricultural prosperity in the face of the Israeli violations and their control over Palestinian lands and resources