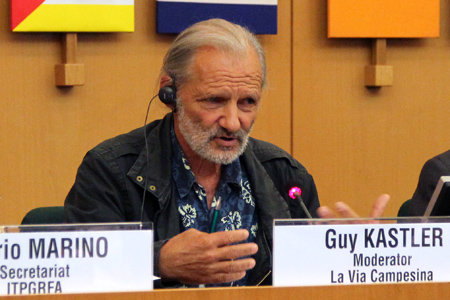 (Rome, October 5, 2015) La Via Campesina and other social movements came to Rome from 5-9 October for the Sixth Session of the Governing Body of the International Treaty on Plant Genetic Resources for Food and Agriculture (IT-PGRFA) to warn the Governing Body against the threat of new patents on native seeds. The Seed Treaty is the only international agreement that clearly recognizes the right of farmers to save, use, exchange and sell their seeds. The Member States of the Treaty have the responsibility of realizing farmers’ rights, but so far nothing has been done. Until now, the Treaty has not been able to guarantee the promised sharing of benefits. The industry, which has been using our seeds for breeding, has never paid anything. Quite to the contrary, more than 10 years after it entered into force, we have seen a shift towards the patenting of our native seeds’ genes, thereby turning the Treaty into a tool of biopiracy, serving industry’s interests.

This is why LVC decided to share its concern with the Governing Body of the Treaty by presenting the statement signed together with many other peasants’ seed networks around the globe. You will find the full text of the statement here