Home » Via Campesina Youth View Staying on the Land as Resistance 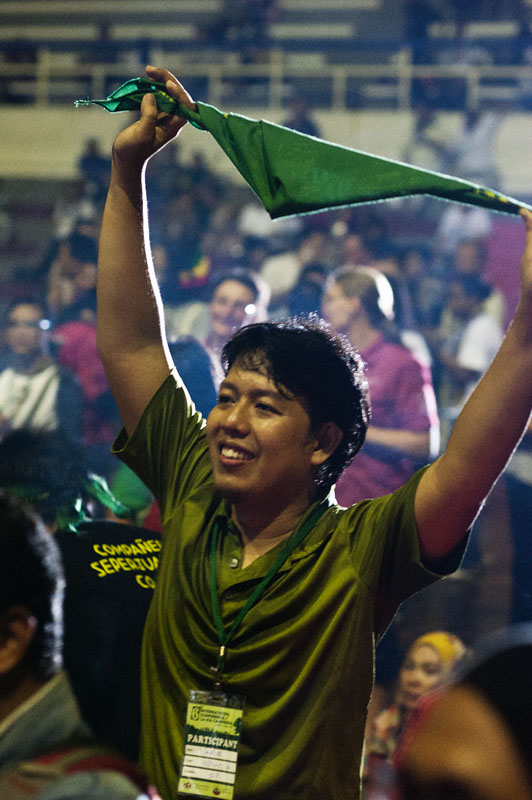 Our Palestinian partners frequently tell us: “To stay – and, frankly, to exist – is to resist.” I heard this same message during the 3rd International Youth Assembly of La Via Campesina (LVC). In a world where the ability to live a dignified life as a small farmer is increasingly challenging whether in Iowa or Indonesia the act of staying, and in some cases “going back” to the land is an act of resistance and courage.

The challenges are enormous. Young and prospective farmers face a hostile environment designed to benefit large agribusinesses and industrial agriculture. In country after country in the Global South policies are put in place that create unsustainable conditions that force mass migrations from rural communities to the urban slums as displaced farmers search for livelihoods. This is not accidental but deliberate.

On the other hand, even under supportive conditions, farming is increasingly difficult. Climate change is causing disruptions in weather patterns in a way that makes farming even more of a gamble than it previously has been.

But the youth of LVC are determined to survive – and thrive. Blaine Snipstal of the US-based Rural Coalition (who traveled with Grassroots International to Brazil last year to meet our partners in the Via Campesina and the Landless Workers Movement there), Ahmed Yakub of the Serikat Petani Indonesia (Indonesian Peasants Union), and Yen-ling Tsai of the Taiwan Rural Front all bring a unique perspective to the struggles of small farmers and peasants.  And equally unique reasons for the life they’ve chosen.  Tsai, for e.g., believes in a future for small farmers, food production via agroecological means, and food sovereignty for us all.  But, she also went into farming with two of her young women friends because, as she told me, “we wanted to do something experimental.  And not live heteronormative lives, getting married, having children, settling down, like we’re expected to.”  Her parents have been supportive.  Others’, not so much.

The LVC youth don’t take lightly that they are the future of farming. “Youth are the future of the world is often a cliché, but youth being the future in our context here at La Via Campesina, of peasant agriculture, is no cliché. It’s a deep truth. It’s so encouraging to see so many young people here who are engaged in food and farming” said Nettie Wiebe, from the National Farmers Union in Canada, a former member of LVC’s International Coordination Committee (ICC). She is right. In the context of rural populations being displaced en masse around the world; and, what seems to be an increasingly difficult future for small farmers, there can be no peasant agriculture without the enduring presence of youth within the movement who are willing to take on the world.
They are ready!  The Declaration of La Via Campesina’s Third Youth Assembly, which was approved during the conference in Jakarta, identifies the enemies that hinder sustainable development and peasant rights around the world, such as neo-liberalism, capitalism, and imperialism. Bearing this in mind, the young people commited themselves to fight against industrial agriculture and land grabbing, GMOs and the privatization of the commons. They also called on international organizations such as the WTO, IMF, and World Bank to respect people’s rights to plan and control their systems of food production.
The youth in LVC have outlined an ambitious action plan for the next four years, and challenged their elders within LVC to work with them in ensuring the active participation of youth at all levels within the movement. Echoing the International Women’s Commission call for becoming the International Women’ Articulation the youth called for a fuller integration within LVC’s campaigns (especially the campaigns for seed and food sovereignty, end to violence against women, and agrarian reform) and structures; and proposed the formation of a youth secretariat to support youth priorities and strategies.
The youth identified food sovereignty through agroecology, access to land, migration and migrant rights, and health as the priority focus areas for the next four years. And called on their colleagues within LVC to facilitate political exchanges that include youth at the local, regional and international levels as well as political education for youth based on the thematic priorities outlined by them to strengthen their participation and integration into the movement.  The new ICC that took charge in Jakarta includes a youth member from Europe (from the Basque Country, which will host the 7th International Congress in 2017).
At the end of the Congress the LVC youth, working together with other youth groups in Indonesia, hosted a concert with popular Indonesian (Balinese), East Timorese, Filipino, and Taiwanese musicians. The concert was part of the Indonesian youth movement’s efforts at crowd funding — they also sold single source coffee from various Indonesian islands, beer, and traditional hadicrafts throughout the Congress — to raise money to participate in a caravan to Bali in December 2013 for the WTO ministerial meeting where they want to make their opposition to the WTO known in full strength.