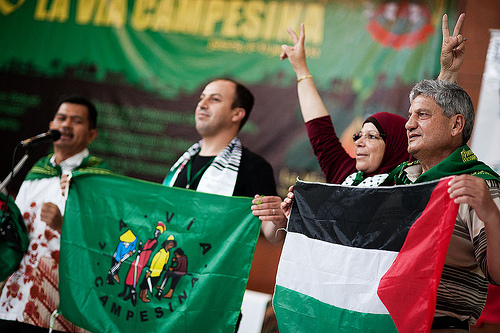 At the VI Conference that was held at the beginning of this month in Jakarta,  Indonesia, la Vía Campesina confirmed 33 new organisations, making a total of 183 member organisations worldwide, Palestine being one of the new countries. The Palestine Union of Agricultural Work Comittees was confirmed at this conference. It has, nevertheless, been taking part in political activities and carrying out moblisations as Vía Campesina since 2004.

La Vía Campesina has been supporting the Palestinian people’s struggle, demanding respect for the principle of food sovereignty and for Palestinian peasants’ right to work and stay on their land.

In 2002 la Vía Campesina experienced its first contact with the Palestinian reality, in order to exchange struggles and obtain information about the peasants’ situation, with the aim of developing a long term support and collaboration strategy tgether with peasant groups and organisations. From then on it condemned the colonisation and confiscation of the Palestinian peasants’ land for military and security reasons, and the destruction of agricultural production with the spraying of pesticidas and the cutting down of olive trees.

However, it was not until 2012 that the Landless People’s Movement in Brazil (LPM), member of la Vía Campesina, organised the first Solidarity with Palestine Brigade, during the period of the olive harvest, the tree being the symbol of the Palestinian people’s resistance. 13 activists from la Vía Campesina Brazil travelled to the West Bank, and the Brigade experienced the consequences of Israeli colonisation, in which military repression reigns, first hand. At the same time, inspired by solidarity and internationalism, they discovered the meaning of the Palestinian people’s resistance for their historic right to the land.

With the incorporation of Palestine to la Vía Campesina  we aim to strengthen the fight for the defence of peasants, rural workers and fisherpeople who have lost their right to land, water and freedom as a result of Israeli colonialist occupation, and furthermore to defend the rights of the Palestinian people which are violated on a daily basis.

“All Palestinians greatly appeciate the central mission of la Vía Campesina in supporting the oppressed peoples of our world, particularly the Palestinian people, where peasants fight for freedom, justice and equality”, says Yousef Haq. “Similarly, I believe that the UAWC, the Union of Agricultural Work Comittees, can achieve a great deal together with la Vía Campesina, particularly in terms of the rehabilitation and reorganisation of Palestinian peasants in the battle against opression”, he concludes.

La Vía Campesina,  as part of its strategy in this new historical period, has set continuing to add new peasant organisations from the Arab world as its goal, with its motto to globalise the struggle throughout the world.