(Jakarta, 07 January 2008) Via Campesina and the Indonesian Peasant’s Union (SPI) welcome the nomination of their leader Henry Saragih as one of the “50 people that could save the planet” by the British daily paper The Guardian, 5 January 2008. Even though this list includes very diverse personalities defending contradictory positions and strategies, the international peasant’s movement is happy to share with its friends and allies this public recognition of its role in the struggle for a fair and sustainable planet. 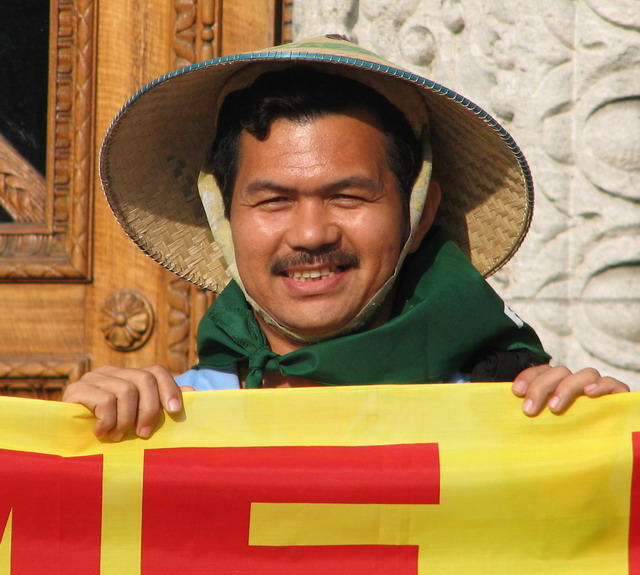 The reversal of current agricultural policies is indeed a global emergency if the world wants to protect its people and its forest, land and water resources in the coming decades. Via Campesina opposes the neoliberal food system that promotes food exports all around the world, high use of chemical inputs, genetically modified seeds and corporate control by transnational companies.

The social movement promotes and practices “food sovereignty”, the right for people and countries to define their own agricultural and food policies according to the needs and the priorities of local communities. Food sovereignty encompasses mechanisms to protect domestic food production against low price imports, strict control of food imports to stabilise internal market prices, and supply management systems to avoid dumping on the world markets.

Via Campesina also asserts that sustainable peasant’s agriculture and local food production will significantly reduce global warming by reducing transport and oil-based agrochemical products (such as pesticides and fertilisers) and by using diverse farm practices that store CO² and reduce considerably the use of energy on farms.

La Via Campesina is an international movement which brings together millions of peasants, small producers, landless people, rural women and agricultural workers around the world. Our movement is made up of 132 member organisations active in 56 countries in Asia, Africa, Europe and the Americas.

More information:
“50 people who could save the planet” :
http://www.guardian.co.uk/environment/2008/jan/05/activists.ethicalliving
La Via Campesina: www.viacampesina.org