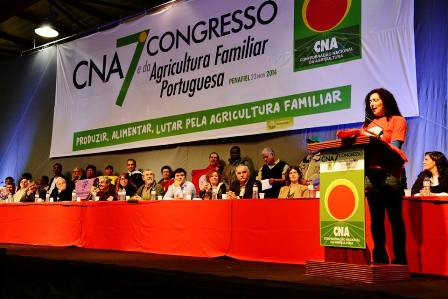 (Porto, Portugal, 25 November 2014) On November 24th, 2014, following meetings of the LVC International Coordinating Committee (ICC) and the International Operative Secretariat (IOS), a La Via Campesina delegation, comprising 87 participants from 25 countries, visited vineyards owned by family farmers in the demarcated region of the Douro district. This field visit was organized by Confederação Nacional da Agricultura (CNA) and guided by one of its member organisations, AVIDOURO, an association of small wine growers.

Due to the Portugese government’s austerity measures, the budget allocated to agriculture has been cut. However, taxes and production costs continue to increase. More family farmers are experiencing distress – to such an extent that, in 2013, about 14,000 farmers applied to the government for social assistance.

Poverty levels in Portugal are worsening. In 2012, about 17.5% of the population was at risk of poverty. Confederação Nacional da Agricultura (CNA) continues to fight for recognition by policy makers of the importance of family farming, and it lobbies the government to support small and medium family farmers. The CNA also calls upon the government to establish remunerative prices that will allow small and medium farms to be viable.

On November 23rd, the day before the field visit, CNA held its congress in Penafiel, which was attended by over 300 farmers from the region and over 2,000 small and medium scale farmers from other parts of Portugal. The congress adopted several motions in favour of the struggle for agricultural and marketing policies that would allow farmers to live with dignity from their work. The congress also adopted the “Statute of Family Farming in Portugal” and the “Charter of Portuguese Family Farming”. These documents define family farming and set out the specific rights of family farmers, in order to outline a set of guarantees and rights enabling the work of family farmers to be valued, so that farmers will be “compensated” for their good quality produce as well as for the public goods and services that they provide to society. The government representative present at the congress, in addition to highlighting areas where gains have been made in promoting small farmers, promised to continue to work towards addressing other outstanding issues.

La Via Campesina delegates attended the congress, and the International Coordinating Committee members took turns to offer their solidarity for the struggles of Portugal farmers. In recognition of the role LVC is playing in the struggles of small farmers, CNA presented a special medal, which was received by Elizabeth Mpofu, LVC General Coordinator, on behalf of the movement. The participation of Via Campesina in the CNA Congress was experienced by all with great symbolism and intensity, and it was an important demonstration of resistance, solidarity and hope of small farmers worldwide.