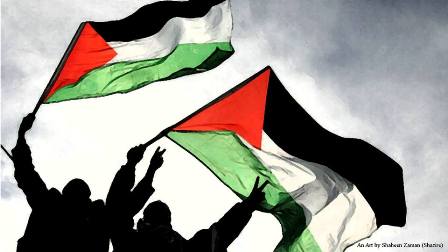 During the first nine days of November, a number of representatives of social and political movements, trade unions, and farmers’ organisations from Euskal Herria and Andalucia (Spain) visited Palestine, in response to an appeal from La Via Campesina. The group’s mission was to monitor human rights violations in the region, especially with regard to the rural majority, who are both the country’s economic motor and the main target of the Israeli Zionist regime’s colonialist policies.

Through the Union of Agricultural Work Committees (UAWC) in Palestine and its local committees, we were able to observe the methodical depravity of Israel’s treatment of Palestine society in general and of the rural majority in particular. This treatment shows a disregard for all the rules of international humanitarian law as well as for the obligations that the 4th Geneva Convention imposes on Israel, as an occupying power, with respect to the Palestinian population under occupation. As of today, in its criminal construction, Israel is employing policies and measures that constitute Apartheid, a situation that is being denounced by the principal human rights bodies of the United Nations and by Palestinian – as well as Israeli – social organisations. Apartheid in Palestine manifests itself in a political, economic, and social system that is dominated by discrimination and oppression, a system in which freedom of movement is forbidden and territory is appropriated in order to consolidate the existence of the Israeli State.

In this struggle over the appropriation of land and natural resources, Palestinian peasants, women and men, find themselves in the first line of fire. 70% of the land occupied by the Israeli army is agricultural land, a situation that affects the way of life and the resistance of the peasant population.  It is in this sense that the Palestinian peasant population has become the principal focus of the war of extermination, the first target of colonialist policy and of the Zionist armed forces. But the Palestinian peasantry is also the front line of resistance against the occupier, an example of dignity and of struggle – despite the most terrible hardships suffered by these people who are ready to defend the land that was always worked by their ancestors. A collectivity that sees the path toward Food Sovereignty as a tool for resistance, a way to feed their population and to maintain their culture and identity, to survive the violence of the occupation and to remain on their land – a path that in addition unites them in brotherhood with peasants and farmers throughout the world.

We have listened to direct testimonies from peasants describing the different legal means that Israel uses to stifle their productive capacity: barring the way to their fields; refusing to grant licences for the installation of wells and/or infrastructure necessary for growing crops and raising livestock; obliging them to use hybrid seeds imported from Israel; and maintaining a monopoly over the provision of plant protection products. And when the law is not enough, the Israeli armed forces, and the private security bodies contracted by the Israeli State, carry out orders for the demolition of houses and/or shoot at peasants in their fields or, in the case of the fishing community of Gaza, at fishers in their boats. Israel has taken over more than 80% of the water resources that were assigned to Palestine in the signed Peace Agreements, thus making it impossible for Palestinian peasants to continue with their way of life and traditions, and to maintain their autonomy as providers of food for the present population and for the generations to come.

At the same time, Israel has imposed an economic blockade that seeks to make the occupied economy dependent on the occupying power. Without access to external markets, Palestine peasants, men and women, trade mainly in local markets, which are at the same time flooded by Israeli products brought in through practices that reinforce unfair competition. They also suffer from blockades aimed at the deliberate waste of merchandise and products.

The occupation battle is also a symbolic battle, a battle to usurp the symbols and values of the rural farming population. It is not only a question of stifling the peasant population, but also, in a perverse manoeuvre, the Israeli settler population enjoys all sorts of benefits and perks that enable it to develop an economic and social fabric based on intensive agriculture, and, in this way, to replace the practices and principal players of peasant agriculture. The perverse nature of the occupation not only robs peasants of their way of life but also turns them into an enslaved and insecure workforce at the disposal of the State that oppresses them.

In particular, the situation of the peasantry is even worse in the case of Palestinian women, who are also victims of the Israeli occupation, as women, as mothers, as sisters, and family members of their male comrades, as well as being victims of patriarchal repression. The patriarchy places obstacles to their involvement in the public and social spheres, obliging them to accept the pressures of maternity as part of their resistance, so that they have to struggle and work twice as hard as their male comrades – in order for their practical and strategic needs to be taken into account and recognised, both in the private sphere of the home and in the public sphere of the organisations to which they belong.

The women members of the UAWC and of the Union of Palestinian Women Committees (UPWC) with whom we were able to talk during our visit – and scarcely to begin to get a glimpse of the entire situation faced by women – reminded us that the struggle of Palestinian women peasants is a feminist struggle, one that seeks to end all forms of inequality between men and women and that seeks to question the power relations oppressing both women and those men who do not respond to gender roles. As such, they need our support and our work in order to do away with all forms of oppression no matter what their source – be it capitalist interests, the occupation, or the patriarchy. There cannot be food sovereignty without equality, or freedom without resistance to all forms of oppression.

We, the men and women peasants and farmers who accompanied this delegation, cannot end our indignation or cease to be moved by our feelings of solidarity with our brother and sister workers in this territory, which is both so afflicted but so rich in human dignity. Because to exist is to resist, and, despite this inhuman situation, Palestinian peasants also use the hope and dignity of their struggle as material for the symbolic banner which they clasp in order to carry out their age-old task of feeding their families and their communities and looking after the land to which they feel bound.

For this reason, we assume as our own the demands that we compiled from the UAWC and from other social organisations during our visit:

a)     Increase the efforts and the necessary support for the adoption of the Declaration of the Rights of Peasants, Rural Workers, and Fishers under discussion in the United Nations Human Rights Council, as one more tool with which to defend their cause, their right to live as peasants. Combining our efforts, bringing our Palestinian brothers and sisters into this process can strengthen their resistance in their dealings with the international community and enrich a discourse that we believe to be useful as a general framework for peasant struggles regardless of the geographical area in which these take place.

b)    Promote the formal participation of the Via Campesina and of its member organisations in the Boycott, Disinvestment, and Sanctions Campaign as a tool for struggle against the crime of apartheid that the Israeli State is committing against the Palestinian population.

We are currently witnessing a favourable position on the part of several western governments with regard to recognition of the Palestinian State. We have no doubt that these steps that western diplomacy is taking presuppose a change in the status quo, and in this sense they are welcome. But we believe that our work as a social movement must place emphasis on reminding those who govern us, and the societies to which we belong, that the moral imperative of the human rights declaration, and of other such instruments adopted through the years, obliges us to place the emphasis on denouncing the Israeli State for its commission of the crime of apartheid against the Palestinian population. In response to a crime against humanity, and, therefore, to a crime that implies a violation and an attack with regard to all of humankind, we join with all of the Palestinian social organisations in their united appeal to use the BDS campaign as the most efficient means of pressure that can lead to changes in Israeli policies so as to bring to an end the occupation and the crimes and systematic human rights violations, and to approach a definitive solution to the question of the Palestinian refugee population. It is the tool that can contribute to the creation of opposition to the occupation within the Israeli public and give rise to the dismantling of the social legitimacy that Zionist plans, always sheltered behind the logic of security and constant external threat, have at the present moment.

This has happened in South Africa and elsewhere. History has shown us that if the boycott is increasingly widespread at the economic, cultural, and social levels, if it is unanimous, and if as societies we show our rejection of the prevailing situation, we can confront injustice. If we ignore this fact, we will be, whatever the case, giving legitimacy to injustice and we will be contributing to the violation of Palestinian dignity and betraying the ancient culture of its peasant population.

c)     Increase cooperation with the Palestine organisations that are working to build food sovereignty in their territory. Through exchanges, through our actions within our own societies in favour of the Palestine cause, …there are many possibilities that we can find in order to support the work that our women and men comrades of the UAWC accomplish every day despite the risk to their own lives and to their families. Let us come closer to our comrades and look at them more closely so as to feel their struggle as our own.