Home » US and EU Free Trade Agreement is recipe for trouble 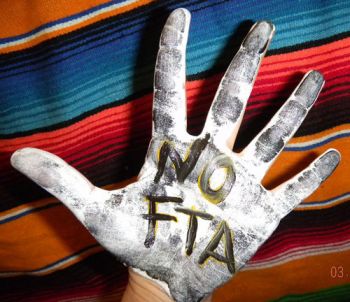 Proponents of the free trade agreement between the US and EU have denounced the opposition of TTIP as dogmatic (FD, June 10th). But our opposition is not based on chagrin, but on witnessing the real-life impacts of other similar agreements on our food, environment and social well-being.

TTIP was launched to the sounds of cheering and applause, with its advocates promising that the agreement could create hundreds of thousands of new jobs and billions of euros in extra income. But, the European Commission’s own research undertaken by the think tank Centre for Economic Policy Research (CEPR), has shown that the predicted additional GDP growth per year with the free trade agreement will be very low (0.05%). Furthermore, the hundreds of thousands promised new jobs are far from guaranteed.

The European Commission decided on the agreement behind closed doors, with no emphasis on transparency. Yet from what has surfaced, we can already see how negotiators are seeking to limit food safety regulations in order to benefit US agribusiness: allowing usage of hormones in meat and milk; chicken meat cleaned with chlorine; genetically modified grains;  veterinary medicine  currently banned in the EU; and  minimal requirements for animal welfare. Under TTIP these US standards will affect and weaken existing regulations  in the EU.

The promise of EU policy makers that our food will remain hormone-free is misleading. TTIP’s ‘mutual recognition of standards’ means that a product that meets US standards may come into the EU market. The result: higher standards will drop to the lower level, as will there be considerable distortions of competition. Farmers with higher standards and costs will lose this race to the bottom, and consumers will lose the guarantee of GMO-free and hormone-free food.

Within TTIP foreign investors also get far-reaching legal powers to protect their commercial activities via ‘investor to state dispute settlement’ mechanisms (ISDS). Foreign investors can demand financial compensation if they find that new national laws and regulations hinder or reduce their profits. An exemplary case that is conceivable under TTIP, is US-based company Lone Pine Resources CA$ 250 million claim against the government of the province of Quebec after they were denied a permit for drilling for shale gas in Canada Quebec rejected the permit, arguing that drilling for shale gas could impose risks to the environment and drinking water. But their rejection has been undermined as a result of ‘investment protection’ mechanisms in the NAFTA free trade agreement between the US, Canada and Mexico – one that is quite similar to TTIP.

With TTIP such claims are also possible in the Netherlands. At this moment, BNK Petroleum has a pending permit to drill for shale gas in the Netherlands. If TTIP comes into effect, and the Dutch House of Representatives decides not to approve shale gas drilling, US-based BNK could file a claim against the Dutch state. Furthermore, an even greater danger is that the treaty will soon generate a ‘chilling effect’ on politics and policy-making. Fear of claims could make the Dutch government wary of implementing certain measures that protect the environment and the overall well-being of Dutch citizens.

The rights ISDS gives foreign investors are exclusive to them and not available to domestic companies. This preferential position provides a deeply uneven playing field. According to the UN Conference on Trade and Development (UNCTAD) there were 568 investor-state dispute cases last year, under similar free trade agreements to TTIP. Three-quarters of the cases involved European and American companies – and 61 cases came directly from the Netherlands. Exorbitant amounts are claimed and awarded: in 2012 Ecuador had to ‘compensate’ the US-based Occidental Petroleum for US$ 1.77 billion.

Is this progress? Are we willing to sacrifice our democracy for the rhetoric of gold at the end of the rainbow? The politics of illusion and self-enrichment has already put EU citizens in more than enough trouble. Let us not give their spin-doctors the last word again.