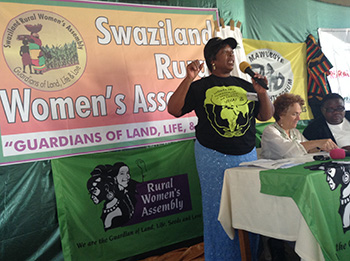 Bulawayo, 14 August 2014- Women from all the corners of the Southern African region descended on Bulawayo to participate in a parallel of the SADC Heads of State Summit, the People Summit, which runs from the 14th to the 16th. They have converged to share their experiences on how they have been affected either by decisions made by governments with little consultations with the people or the inherited colonial agro-mining complex, which continues to grab land for extractive purposes. More importantly, the women have gathered to build and strengthen their solidarity, forge strong alliances and commit to the struggle to push for a system of change.

Today, on the first day, the meeting was energized with a mystica, singing and a drama depicting both the challenges faced by most rural women (evictions from land, loss of livelihoods etc) and the victory that comes with unity of purpose and solidarity.

Solidarity messages were expressed for the people of Palestine who currently suffer gross human rights violation from Israel’s massacre of innocent civilians. Also, solidarity was offered to the many political activists imprisoned in Swaziland for expressing their political views.

Mercia Andrews of Rural Women’s Assembly, called on the women to build a strong unity and solidarity to strengthen the resistance and the voice of the people.”Movements bring change! They change the society and the country! Only organized movements, women can change our situation”, she said. 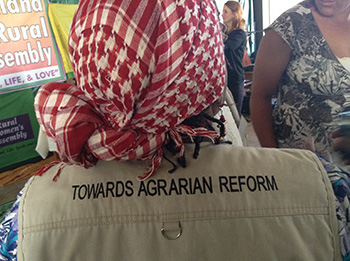 Women are the majority food producers and also constitute the majority of the electorate in Southern Africa and Africa. Grace Tepula from Zambia urged the women to use their majority power to effect change. She said, “A woman is a woman, a mother. No woman, no food. Women should own land and be given the title to it”. Elizabeth Mpofu, general coordinator of La Via Campesina emphasized that we should continue to build resistance so that one day change would come. She further stressed the importance of land and food sovereignty for the lives of rural people and the need to guard against GMO seeds and policies such as the seed harmonization, which destroy the people’s livelihoods.

This year’s SADC Heads of State Summit focuses on natural resources and value addition, but not on the worsening situation affecting communities. Samantha Hargreaves from WoMin (Women in Mining) called on the gathered people to join the alliance to fight against extractive mining companies which steal from communities and pollute their environment. Farai Maguwu said that instead of the western governments giving Africa development aid to end poverty, they should stop stealing natural resources from the continent and allow its people to determine their own development path.
Thus, there is a need to stop transnational corporations from stealing African natural resources. A campaign to dismantle corporate power and to stop their impunity is underway and aims to build people’s sovereignty. “Such sovereignty is critical in our struggle for a better life for all people”, said Brid Brennan, from the Transnational Institute.

In the words of Elizabeth Mpofu, which resonated with all the speakers, “We are not here to celebrate but to know who we are and what we are fighting against. We are here to strengthen our resistance and no one is going to come and rescue us from these challenges.” The People’s Summit is not just a gathering that follows the Heads of States but a growing force from below which seeks and envisages a better tomorrow characterized by equality and equity for all. This movement and its voice continue to grow and cannot be ignored by governments.

Watch the video: SADC Peoples Summit – WHY ARE WE HERE?