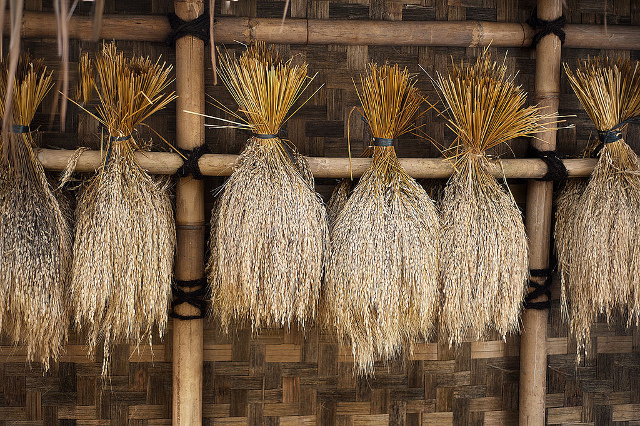 (November 30, 2016) Many years of advocacy on the part of the Via Campesina and its NGO allies have resulted in a first public encounter between the ITPGRFA and UPOV concerning the rights of farmers to save, use, exchange, and sell their farm seeds and to participate in decision-making. This meeting took place in Geneva on October 28th in the presence of observers from the Via Campesina and speakers from allied NGOs.

– the double talk of UPOV, which, on the one hand, claims that nothing in the text of the Convention goes against farmers’ rights, while, on the other hand, it obliges its members to enact laws that run counter to these rights.

– the deafening silence on the part of the delegates represesenting the countries which, in ratifying the ITPGRFA, have recognised farmers’ rights, but which, by implementing the UPOV 91 Convention, persist in disregarding these same rights.

La Via Campesina has also spoken out against patents on native traits of seeds, which constitute a threat both to farmers’ rights and to the survival of UPOV. The WIPO, which was invited to the meeting, did not deign to take part in the discussions, even though its own Secretary-General, who is also the Secretary-General of UPOV, had arranged for the seminar to be held in WIPO’s offices.

It now depends upon us to pressure for the continuation of these encounters, so that, in each country and at the global level, laws are passed, that can be implemented effectively and without restrictions, to guarantee the rights of farmers.

A FAIR BALANCE BETWEEN BREEDERS’ RIGHTS AND FARMERS’ RIGHTS

To a farmer, the product of the harvest is intended as much to feed the family and community and be sold at market, as to be used on the farm as seed stock or vegetative propagating material. Informal seed systems, which mostly use part of the harvest as propagating material, currently produce more than 70 percent of food available worldwide, using only 25 % of cropland. These systems are in the hands of peasant farmers, who constitute approximately half of the world’s population. Compelling these peasant farmers, who often lack the means to buy commercial seed, to stop producing their own propagating material is above all an attack on food security.

Many countries are adopting laws that rely on the International Convention for the Protection of New Varieties of Plants (UPOV Convention) to criminalize all exchanges of seed that is not certified according to the UPOV Convention’s standards of distinctness, uniformity and stability, thereby depriving farmers of any supply of freely reproducible seed. They also criminalize the on-farm production of propagating material from the only commercially available seed, in order to entrench their monopoly not only over the market, but also the fields. If the International Union for the Protection of New Varieties of Plants (UPOV) no longer wishes to be accused of undermining food security in this way, it must clearly state that it does not endorse such laws.

Producing on a farm seed stock and vegetative propagating material intended for cultivation on the same farm is the best way of adapting it to the desired growing conditions. This local adaptation is a key factor in the resilience of agricultural systems to both irregularity and the increased frequency and scale of changes in climate. The other key factor in resilience is diversity within and between varieties of the propagating material used. Farmers regularly renew that diversity through informal seed exchange systems.

The commercial varieties protected by the UPOV system lead to an adaptation primarily to the needs of sectors of the global market, which require standardized products, and the standardization of growing conditions through inputs, mechanization and, often, irrigation. These widely disseminated varieties cannot, however, be adapted to each of the territories or environments in which they will be cultivated, nor to each abrupt change in climatic conditions. Only farmers can perform that essential adaptation, by reproducing and reselecting varieties over several years in their own fields.

The commercial varieties of the UPOV system have all been selected from the millions of peasant farmers’ varieties – collected free of charge in all the fields of the world – which constitute almost the entirety of the plant genetic resources in germplasm banks. Elementary fairness dictates that peasant farmers may do the same by freely reusing commercial seed that they have bought.

Going beyond such basic concerns with fairness, the seed industry will increasingly need to let peasant farmers use their farm-saved seed. Biodiversity is not a collection of inanimate objects kept in a vault. It is the diversity of life, constantly evolving, endlessly renewed. No matter how large it is, the current stock of plant genetic material is finite. In addition, if it is not regularly renewed, it gradually disappears. The FAO estimates that a 75 % loss of agricultural biodiversity has accompanied the spread of homogenous and stable commercial varieties. An erosion of this magnitude severely limits possibilities for recovery. Furthermore, the current dematerialization of resources leads to an incalculable loss of all genetic information that cannot be digitized. The innovations of genetic engineering, which amount to several hundred genes integrated in all crops worldwide, further accelerate that loss. While it is claimed that these innovations make for greater adaptation to extreme climatic conditions, they will never offer adaptation to the increasing variability in climatic conditions, nor to the diversity required by their different rates of development in all of the different localities where they are grown.

New genetic complexes adapted to increasingly rapid changes in growing conditions appear in the fields of peasant farmers who painstakingly select them, year after year, in those growing conditions. The hundreds of millions of peasants who reproduce their seeds each year create far more new diversity than a few thousand researchers with sophisticated equipment. This constant renewal of agricultural biodiversity in the fields is essential, not only for its adaptation in each locality to changing growing conditions, but also in order to replenish the industry’s stock of plant genetic resources. Only by drawing on that constantly renewed reservoir can the industry continue to produce the innovations needed by today’s farmers.

The formal and informal seed systems can no longer exist in a state of war with each other. The formal system developed by drawing all its resources from the highways and byways of the informal system. It will not survive if it destroys the fertile earth that nurtures its roots, nor by feeding solely on the beeps of digitized data. Its survival also depends on the right of peasant farmers to save, use, exchange and sell their farm-saved seed, as guaranteed by the International Treaty on Plant Genetic Resources for Food and Agriculture.

These rights are not antithetical to the founding principles of UPOV, which guarantee the breeder’s rights to reserve the exclusive commercial use of the propagating material from a protected variety. This does not mean allowing a farmer to resell seed claiming the denomination and characteristics of a protected variety without the breeder’s authorization. However, once a peasant farmer has reproduced farm-saved seed, without maintenance breeding the characteristics of a breeder’s variety, it necessarily evolves, more or less rapidly according to the species, towards a better local adaptation and the development of new characteristics. The exception of selection is a founding principle of UPOV and there is no reason to exclude adaptive selection by peasant farmers or limit it to directed crosses.

UPOV must evolve to accept this fair balance between the rights of breeders and the rights of farmers, in the interests of its own survival and, above all, of food security.