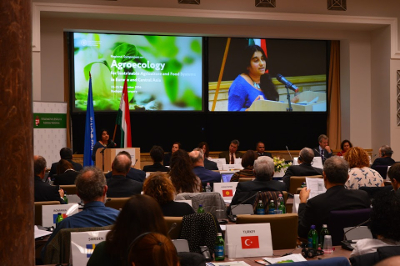 Jyoti Ferndandes, a dairy farmer and representing European Coordination Via Campesina (ECVC) and Nyeleni Europe, was one of the speakers from the delegation.

She spoke extensively on why agribusiness is an outdated idea and how agroecology is evolving. “Agroecology is innovating every day and it develops in a way that we have control over our resources. Building on that knowledge, it is bringing in a new model of agriculture where everyone has a right to access healthy and affordable food.”, she said.

Jyoti also insisted that Right to food should not be governed by research and development corporations or scientists but indeed be protected by our civil society. She emphasised on the difference between real social impact of agroecology and technologies.

“The resources are usually controlled by development researchers. If it is just a focus on the technical part of agroecology, there will be no control of food system and there will be barriers to the access of food production.”, she added.

She also spoke of the processes of Civil Society organisations, the work of ECVC network and recently concluded Nyeleni Europe forum in Cluj, Romania – to bring attention to the role played by CSOs in developing production systems based on the principles of food sovereignty.

“I have a mix farm. I have 4 dairy cows – feed with animal feed which grow in the farm. Western European context is that in Dorset dairy farmers are paid below the cost of the production by the supermarkets. [I saw a video of the] FAO programme in Georgia on dairy. 600 cows concentrated. In the video, everything seems so clean. But in the video, they are focusing on large concentration unit. In contrast, family farms in Georgia have 2-3 cows. They produce cheese and dairy products. In a 600-cows’ dairy, you may have only 4 people working in the dairy. It’s very difficult to have access to daily food for families in that area. People are giving up the traditional way of cow breeding because the land is not accessible for them. Before looking at the science, it is important to look at the resources that allow the access of families and communities to resources and the food production.”

“Land Workers Alliance in UK has been working with diary producers (women, landless) in India. We must understand that it is possible by being small to keep the livelihoods. Saying that small scale producers cannot produce a great quantity of food is not true. The biggest dairy farm in the world is the biggest evil in the world. Policies in Europe are trying to push towards intensification of production, so it is in the opposite direction to agroecology model”

In the ensuing discussions that followd her speech, Guy Kastler from Confederation Paysanne and representing La Via Campesina, also intervened. 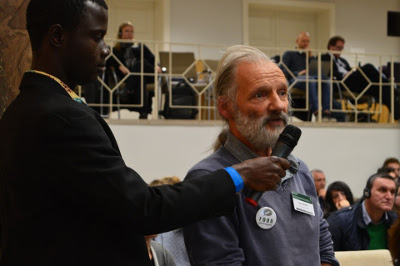 “I am here with LVC. This forum gave us the possibility to participate to this important event. Three points: scientific research take our points on their comments; food sovereignty defined. Agroecology comes from the farmer’s knowledge and knowhow. It is experience exchange from farmer to farmer. We are collaborating with the scientist. We respect their knowledge but agroecology is not merely science. Agroecology is farmer practice.

Alazne Intxauspe  from EHNE-Bizkaia, La Via Campesina also intervened, “The holistic vision and the multistakeholder work can be a good direction. We produce our food daily, following the environment. Our most important recommendation for the discussion is that governments and FAO should give support towards strengthening farmers organisations to carry out agroecology and give food producers all of the support they need to preserve their rights to access to the resources needed for agriculture  – land, water, and seeds- before putting resources into developing the science of agroecology.”