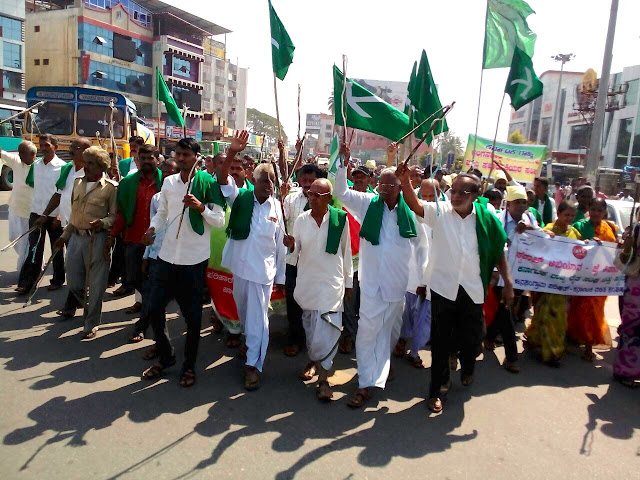 On November 21, as legislators prepared to start on the winter session of the Karnataka Assembly at Suvarna Soudha in Belagavi, Karnataka (South India), a series of coordinated protests erupted in different cities across the State. These protests, organized under the leadership of Janandolanagala Mahamaithri (The Alliance of People’s Movements) sought to bring lawmakers’ attention to the problems crippling rural Karnataka. Protestors had been on a campaign trail for a month prior, mobilizing cities and villages with a three-point demand: a complete waiver of loans of farmers, farm workers and women’s self-help groups; and, a scientific compensation for crop losses plus the implementation of a comprehensive drought management plan.

This is the first campaign for the Alliance, which announced its formation at a conference in Mysore a few weeks ago. The Alliance has brought together diverse people’s movements in Karnataka to collectively ask for accountability from those running the State. Chukki Nanjundaswamy, Working President of Karnataka Rajya Raitha Sangha, a major constituent member of Mahamaithri, stated,  “This attempt at coming together articulated new desires of hope”– for the future, for an imagination of collectivity.

The indefinite protest, at Belagavi, was kicked off by the movement for land and housing rights organized by the Bhoomi Matthu Vasati Vanchita Horatagarara Samiti, member of Mahamithri.  H. S. Doreswamy, the 98-year-old veteran freedom fighter who led the protest said that the poor had been completely neglected by successive state governments since Independence. A neglect that pervades the way the State governments treat rural Karnataka.

Karnataka has been declared drought ridden for 11 of the past 16 years and yet there is no comprehensive drought management policy in place that can kick off immediately to addresds rural distress. 139 out of 176 Taluks have been declared as being under severe drought this year and yet this is not being treated with the seriousness it deserves. Recently cities in Karnataka have also had to bear the brunt of what the world is terming ‘water wars’ and yet the lawmakers refuse to address the fears and insecurities around food and water that citizens of this State have to live with.

“Drought is like having an accident. Those standing nearby need to immediately provide water to the accident victim. But both the Central and the State governments are standing by saying, ‘You do it first,’ ‘No, you do it first,'” said an anguished Devanuru Mahadeva, writer, thinker, and one of the guiding leaders of the Mahamaithri. Speaking at a press conference in Belagavi, after the disappointing response of the Karnataka Assembly to their demands, he spoke about the effect that chemical farming has had on the land and asked for a new way to re-imagine how we think about land and ownership stating that all land should be on lease and taken back by the State when abused. He also referred to the massive 1.14 lakh crore loans, given to corporate India, that have been so willingly written off by the banks recently as compared to the absolute refusal to waive of loans of farmers, farm workers and women.

KT Gangadhar, President of KRRS, who led the protest in Shivamogga, referred to Prof. Nanjundaswamy’s warning in the late ’80s about the anxieties that would plague producers of food post-liberalization. This is an anxiety that rural India now struggles with–amplified by persistent drought conditions, exacerbated by criminally neglectful government policy. Members of KRRS marched the streets of the Shivamogga, holding the oxen whip up as a symbol of resistance. “Farmers whose lands are their life force should not be forced into a position to sell,” said K T Gangadhar. “Protecting our agricultural practices is equivalent to protecting our living cultural heritages.”

On Thursday December 1, KS Puttannaiah, leader of Karnataka Rajya Raitha Sangha and Member of the Legislative Assembly will introduce a private member’s resolution asking for the demands of the campaign to be met. The Mahamaithri in their latest press release has stated that if this resolution is not supported they will issue a call to intensify the movement.

It might be worthwhile for the government to take heed of the words of HS Doreswamy: “Sparks have turned into raging fires and these will not spare those in power”.