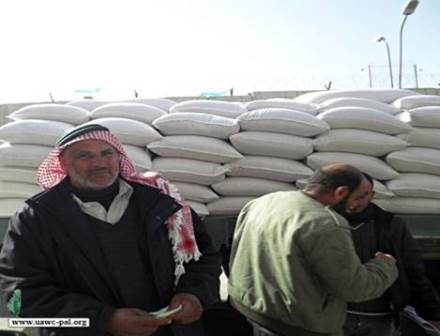 (Ramallah,  March 6, 2016) the Union of Agricultural Work Committees distributed 100 tons of drought tolerant seeds for 11 villages and Bedouins communities in the governorates of Bethlehem and East Jerusalem, as part of the project “Emergency assistance to small scale farmers in the West Bank”, which is funded by the United Nations / Office for the Coordination of Humanitarian Affairs,” OCHA”

UAWC’s project coordinator, Omar Titi, pointed out that the project targeted eight rural communities in the governorate of Bethlehem, and three Bedouin communities in East Jerusalem, who depends on sheep breeding as the only source of incomes, noting that the distribution of feed seeds aimed at cultivating pastoral land in areas classified as “c” with feed crops. Thus, reducing production costs, and strengthening the Palestinian farmers’ steadfastness on their lands especially in the face of settlers’ daily attacks.

He added that the project targeted 660 farmers from sheep breeders owned at least 25 thousand sheep, and is implemented by UAWC in coordination with the Ministry of Agricultural.  UAWC’s acting director, Fuad Abu Saif, confirmed that this project aims to support sheep breeders in areas classified as “C”, which is considered the most affected area to drought because of low rates of rainfall.

This leads to the conversion of green pastures into barren areas, which increase the areas’ residents’ sufferings. In addition to the Israeli occupation and settlers’ daily attacks on the farmers that is doubling their suffering.