Home » March 8th: Organising and struggle to win our rights 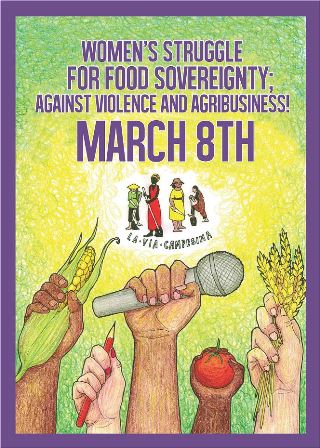 (Harare, March 8th, 2016) Today, International Women’s Day, La Via Campesina is calling for action against capitalist violence all over the world. Capitalist violence is not only the violence that is directly inflicted upon women; it is also an integral part of a social context of exploitation and dispossession that is characterised by the historical oppression and violation of the basic rights of women peasants, farmers, and farmworkers, landless women, indigenous women and black women.

La Via Campesina emphasises the importance of organising and struggle, leading to liberation and awareness and enabling women to participate in politics as historical subjects – with the goal of building a just society, regardless of ethnicity, gender, or sexual orientation.

The international peasant and farmer movement is very troubled to see that, with the spread of conservative policies which constitute an attack on women’s human rights and their very lives, there is growing oppression of women by capitalism and the patriarchy around the world.

In Turkey, where we recently held the La Via Campesina Midterm Women’s Assembly, we saw how the situation of women has worsened with the growing extension of neoliberal and conservative policies. Women continue to be deprived of their most basic freedom, of their elementary rights; they are exposed to violence and to feminicide. In recent years, in this region of the world, there has been a dramatic increase in murders of women. Girls are forced to marry when they are still very young. In the economic sphere, most of the precarious work is done by women. In the rural areas, women perform many jobs; they do not, however, have economic freedom or access to property, and still less do they have social rights.

In south-eastern Turkey, women’s problems are being exacerbated by the ongoing war,  and their lives are under very real threat. The current political situation in Turkey does not offer any solution to the problems faced by women. In fact, current policies are compounding the problems and increasing the discrimination against women. For these reasons, women are organising, and they are now leading many environmental, social, and political struggles.

In recent days, we have learned with great sadness of the assassination of Berta Cáceres,  peasant leader of the Lenca indigenous people and member of COPINH (the Civic Council of Popular and Indigenous Organisations of Honduras). Berta Cáceres had repeatedly expressed her opposition to the destructive plans and actions of the Honduran government, which is offering natural resource concessions to foreign transnational corporations for dam construction and is facilitating the takeover of the resources belonging to the indigenous peoples.

It is for these reasons, that the women and men of La Via Campesina, confronted by this context of criminalisation, are calling for March 8th, 2016, to be a day of mobilising and organising against all forms of oppression, of taking to the streets and public areas of our cities, towns, and territories, in order to denounce the destructive capitalist and agribusiness model and to show how it harms the lives of women and jeopardises the food sovereignty of the world’s peoples – directly affecting women peasants and small-scale farmers. We will continue to struggle for new gender relations within our movement, and we will continue to promote a societal model based on justice and equality.

Berta lives on! The struggle continues!

Postcards and audios: Campaign to Stop Violence Against Women