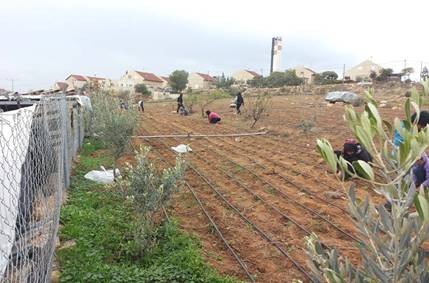 (Ramallah, April 4, 2016) The Union of Agricultural Work Committees distributed 5000 thyme seedlings to 13 families in Um Al-Kair village in the governorate of Hebron to increase the steadfastness of its people and protect their land from confiscation.

The UAWC clarified that Um Al-Kair village is one of the Bedouin villages in the governorate of Hebron, and it is the subject of Israeli violations and their attempts to eradicate its people from their lands by the establishment of “Karmiel” settlement, which enforced its people to depend on house gardens as the only source of incomes.

Fuad Abu Saif, the UAWC’s acting director, confirmed that Um Al-Kair’s people are greatly suffering from the Israeli occupation and settlers ‘violations, pointing out that the UAWC contributions by providing thyme seedlings to Um Al-Khair people came under the ambition of strengthening their steadfastness over their lands, especially that thyme plant is linked to the Palestinian identity.

Al-Hathleen added that this activity would provide 13 families with a constant source of incomes.