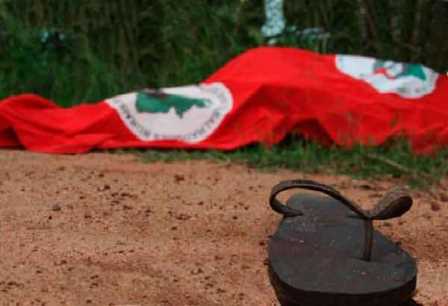 Last Thursday afternoon, families of the Landless Workers’ Movement (MST) organized in the Dom Tomás Balduino Camp, were victims of an ambush by the State Military Police and private security forces of the logging company Araupel.

In this cowardly attack, promoted by the Military Police and Araupel’s private security, were murdered rural workers Vilmar Bordim, 44, married with three children, and Leomar Bhorbak, 25, who left behind his wife who is nine-months pregnant. At least seven workers were also wounded, and two more were detained by the police to obtain declarations, and have already been released.

The camp, located in the municipality of Quedas do Iguaçu, in the state of Paraná, began being inhabited by approximately 1,5 thousand families in May 2015. It’s located in the Río Dos Cobras property, which previously had been illegally occupied by the logging company. Justice declared, because of this fraud, that those lands were public and had to be destined to agrarian reform.

According to statements by the victims of the attack, there was no previous confrontation. When the ambush occurred, approximately 25 Landless Workers were traveling in a pickup truck, 6 kilometers away from the camp, within the perimeter that was declared public by the Brazilian justice. They were surprised by the police and security forces that were hiding.

Upon seeing them aggressively approach the vehicle, the Landless Workers ran towards the camp, running away from the endless shooting, to protect themselves.

The place where the ambush occurred was isolated by the police, who prevented the families of the victims, lawyers and journalists, to access the location, and threatening them. This behavior allows the police to destroy any sort of proof that may reveal the truth of these serious events.

The Military Police has created a climate of terror in the city of Quadas do Iguaçu, by appropriating the streets, fencing the police station and the hospitals of Quedas do Iguaçu and Cascavel where the wounded are being treated, and preventing the victims from making any type of contact with their families, lawyers or journalists.

This attack of the Military Police to the Landless, occurred two days after the visit of the Secretary of State, Valdir Rossoni, and the representative of the leadership of the Paraná police, on April 1, to Quedas do Iguaçu, where they issued the order to send a contingent of more than 60 police officers to the municipality.

The MST has been in the region for more than 20 years, and always acted in an organized and peaceful way to advance towards the agrarian reform, and claiming that the land should serve a social role. Only in the great estate that Arapuel had occupied, 3 thousand families were able to make a living.