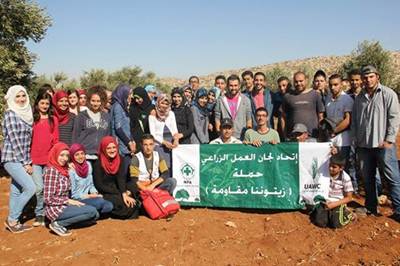 (Palestine, Ramallah) – The Union of Agricultural Work Committees (UAWC) completed its olive harvest campaign under the slogan “Our Olive is Resistance.” The campaign was launched in the beginning of October in Bet Rima village in the Governorate of Ramallah. UAWC’s employees along with agricultural committees and a number of volunteers from AlQuds Open University have participated in the launching activity of the campaign.

UAWC launches an olive harvest campaign each year to help the Palestinian farmers and protect them from the Israeli violations. The presence of the international volunteers along with the Palestinian academics and students lowers the severity of the Israeli violations. The presence of activists can reduce the risk of extreme violence from Israeli settlers and army and supports Palestinians’ assertion of their right to earn their livelihood.

In addition, The Olive Harvest Campaign provides a wonderful opportunity for international activists to spend time with Palestinian families in their olive groves and homes. It is important to note that UAWC launches yearly an olive harvest campaign to support the Palestinian farmers within “Defending Our Rights” project that is funded by the Norwegian People’s Fund (NPA).