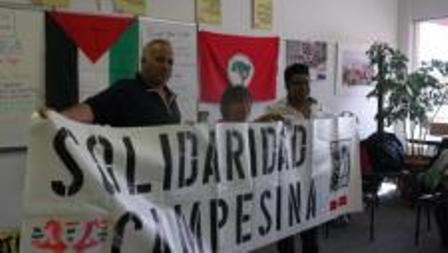 By Julia Burke (Original article published by The Progressive)

Ali Abd El Rahman has been in the United States for only a few days, but it’s the longest he’s ever lived without having to go through a military checkpoint.

El Rahman lives in Jerusalem, and as a Palestinian, his actions, resource use, transportation, and work are under Israeli government control. He doesn’t even have a legal passport; the Israeli government issues Jerusalem Palestinians travel documents that require a lot of explanation when he attempts to cross international borders.

Most poignant for him, however, is the fight for a right that most Americans take for granted: land sovereignty for the farmers in his homeland, who are attempting to continue their heritage as stewards of the land despite egregious obstacles. From their water use to transportation throughout the territories, Palestinian farmers are subject to the authority of the Israeli occupying military.

“The Israeli occupation controls every small detail of Palestinian life,” he explains. “The water, the electricity, the food, the movement, anything you can imagine.”

Even Palestinian roads have been limited to Israeli settler use only, inhibiting connectivity and transportation. “Thousands of Palestinian farmers cannot reach their farms freely; they need special permission, and only during certain hours,” El Rahman says.

Out of this need for farmer support and solidarity, the Union of Agricultural Work Committees, an organization dedicated to assisting Palestinian farmers in the fight for sovereignty over their trade and their land, was born in 1986. El Rahman, the organization’s board chairman, visited the United States for the first time this year to receive a Food Sovereignty award from the U.S. Food Sovereignty Alliance on October 15 in Des Moines, Iowa.

“Our group has done work with Palestinian farmers before, and we were really impressed by their projects, by the union promoting cooperation, and their whole idea of food sovereignty,” explains John Peck of Family Farm Defenders, who sat on the board for the U.S. Food Sovereignty Alliance’s award recipient selection.

“Food control is a universal desire of farmers,” he adds. “The one thing that’s so different about situation of El Rahman’s organization is they don’t have control over their land or water, and the fact that they’re doing this is a real success story.”

The group offers farmers access to education, training on best practices and techniques, support, and solidarity in the face of daily challenges to their livelihood.

El Rahman, who comes from a farming family, firmly believes that for the 25 percent of Palestinians living under the poverty line, food sovereignty for farmers is the key to ending hunger.

“Poverty without controlling your food means true suffering: both poverty and hunger. If you can control at least your food, you can survive,” he says. “For us food sovereignty is a tool of struggle against the occupation.”

Olives for olive oil are Palestine’s primary crop, with figs, cheese, and grapes following closely. “We try to develop the quality of the olive oil by giving farmers instruction on how to pick the fruit, how to press it, and how to have good storage to have good quality of olive oil,” El Rahman says.

Facing a water shortage and control over only 20 percent of their water supply, olive growers must also deal with frequent sabotage by Israeli settlers, El Rahman explains.

“The settlers cut down the trees during the night,” he says. “These are 500 or 1,000-year-old trees. It’s part of human heritage.” He adds that settlers have also burned olive trees to the ground before farmers can harvest the fruit.

Additionally, because Palestinian products are forbidden from entering Israel and Israeli eggs are two or three times the price of Palestinian eggs, settlers are buying cheaper eggs from Palestinian farmers and selling them for profit in Israel, El Rahman says. In response, there are recent efforts by Palestinian farmers to establish cooperative markets where farmers can sell their wares directly.

For the last eight years, El Rahman’s group has also run a seed bank that identifies, stores, and preserves disease-resistant and weather-hardy local strains of seeds for Palestinian farmers to use.

“Farmers usually produce their own seeds every year, keeping back the seeds after experiments to see what seeds are the best. We have labs that examine these seeds and keep some frozen for researchers for up to five years,” El Rahman explains. “We loan the farmers seeds, and the next season the farmers give back what they took and maybe donate even more. So the project is improving and developing every year.”

This level of genetic selection allows farmers to compete and respond to environmental changes associated with climate change within a framework that supports their ethics, cultural values, and independence.

El Rahman believes the United States has the potential to take a leadership role in food sovereignty issues worldwide.

To learn more about his organization, visit www.uawc-pal.org