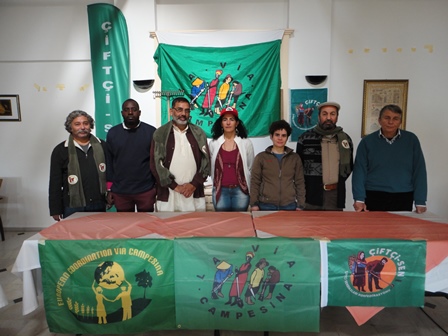 (Izmir, Turkey, November 18, 2015) The Turkish government hosted the G20 Summit that took place on the 15th  and 16th of November in Antalya. As the host country, Turkey was responsible for deciding the Summit’s agenda, which, rather than containing initiatives to respond to the multiple global crises, instead promoted the further transfer of public wealth to the private sector, under ‘Public Private Partnerships’ (PPP), as well as investment in coal and other polluting energy sources. This approach will exacerbate the climate crisis. The Turkish Government appeared to be using the hosting of the G20 summit to cover up its own destructive policies.

According to Abdullah Aysu of Çiftçi-Sen “Public Private Partnerships are nothing more than the low-priced transfer of farmland to the private sector. Mega construction projects, highways, and other large-scale  infrastructure investments destroy valuable agricultural land, and millions of dollars in public funds are transferred to private companies. Industrial investments lead to the eviction of peasants and small farmers  from their land, obliging them to move to the cities where they become a cheap labour force.”

In his letter explaining the agenda for this year’s G20 summit, the Turkish Prime Minister emphasized the importance of improving food security through sustainable food systems and of increasing the productivity of small farms. In reality, however, current government policies are destroying small farms and eradicating the diversity of the country’s agricultural production. B y promoting false solutions such as climate smart agriculture and clean development mechanisms, these policies destroy our environment and our climate.

Carlos Marentes of La Via Campesina said “The G20 agenda pushes for further trade liberalisation. This is one of the biggest enemies of food sovereignty. It destroys local production and leaves food and agricultural products at the mercy of multinational companies, allowing dumping on local markets of wheat from Kazakhstan, sunflower seeds from Ukraine, soybeans from Argentina, corn from the United States, and meat products from Europe .”

Members of the international delegation of La Via Campesina[1] that had travelled to Turkey participated in activities organised by the Turkish LVC member organisation, Çiftçi-Sen. They visited Soma, where they learned how energy investments and Public Private Partnerships had led to the deaths of 301 mine workers – all of them former farmers who had been forced to give up farming. The delegation participated in a village meeting in Yırca and visited farmland where, in November 2014, a private coal-mining company illegally destroyed 6,600 olive trees in order to force the olive farmers off their land so as to make way for the construction of a new coal plant. Coal power installations destroy both farming communities and the environment.

Çiftçi-Sen, together with La Via Campesina, will follow the initiatives of the new Turkish government closely and will continue to struggle against the expulsion of farmers from their land. From the 23rd-25th of February, 2016, La Via Campesina will hold its Midterm Conference in Turkey. The Conference will be hosted by Çiftçi-Sen, and it is expected to strengthen the presence of La Via Campesina in the region.