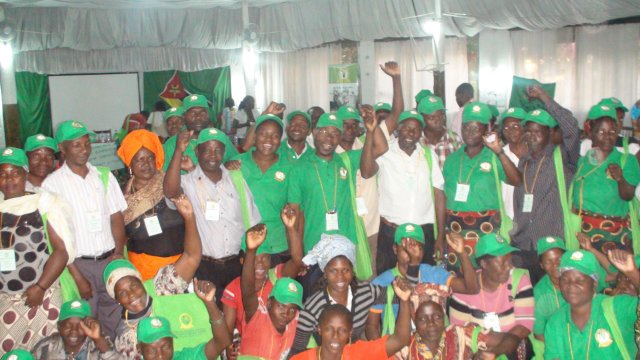 (Nampula, May 1st 2014) The União Nacional de Camponeses (UNAC), is the Mozambican peasant movement which for over 25 years fights for the social, economic and cultural rights and food sovereignty of Mozambican men and women peasants. Counting with the presence of 100 men and women, youth and peasant leader delegates and invited guests from across the country came together for one more General Assembly, referring to the 2014 associative exercise, from the 29th of April to the 1st of May, at Quinta Nasa, in the surroundings of Nampula City, in Nampula province.

The Nampula Assembly take places in a time where the country is immersed in political and military tensions which have reached alarming and profoundly threatening proportions for national reconciliation and Peace consolidation, and the deepening of the democratic process. These tensions have severe impacts thousands of men and women peasants, especially those living in the areas where the conflict is physically taking place. On the other hand, the marginalization and total exclusion of peasants from the definition and prioritization of national development policies, particularly those with an agrarian focus; the systematic violations of peasants’ land rights by mining, hydrocarbons and agribusiness megaprojects and other private and public investments; the successive attempts by certain sectors of government and others of increasing profitability and privatization of land, represent to us peasants a national emergency, for which we are called to position ourselves and toughen our resistance and struggle agenda.
Among other background issues in the life of the movement and the country, the Nampula Assembly analysed and approved important strategic instruments, with special attention to 2013 annual activity and fiscal report, and the 2014 annual action plan and its respective budget. Other issues were also worthy of attention and discussion: the current political-military situation and its impacts on the lives of peasants’ lives and agricultural production; the PROSAVANA program and peasant resistance mechanisms and strategies to confront it by peasant communities in the Nacala Development Corridor and the peasant movement as a whole; the growing conflicts and processes of landgrabbing in Mozambique; the situation of natural calamities and disasters; the negative impacts of megaprojects and development in communities across de country; conservation agriculture and seeds in Mozambique; UNAC’s gender policy; the National Plan for the Support of Peasant Agriculture in Mozambique; and the International Year of family Farming and its meaning for peasant families.
After UNAC and 20 other national organizations having sent out the Open Letter to Urgently Detain the PROASAVANA Program to the Presidents of Mozambique and Brazil, and Japan’s Prime Minister, there have still been no responses. During the Nampula Conference, peasant leaderships from all over the country reiterated their repudiation of PROSAVANA, establishing a road map and resistance agenda of national scope.
We, men and women peasants, denounce and repudiate the acts of persecution, intimidation, bribing and manipulations against individual man and woman peasants, and peasant leaderships in the districts affected by PROSAVANA and national leaderships, carried out by the PROSAVANA implementation team, district administrators, and high-level national leaders. The Nampula Assembly decided to communicate that UNAC will no longer tolerate these acts and promises to legally sue the promoters and protagonists of such actions, be them national or foreigner citizens in service by the Government.
“In the districts of Gurué and Alto Molocué men and women peasants are being harmed by companies who are pushing them to a scenario of misery and hunger . In 1975 the country knew Independence and Peace, but today communities are once again immersed in a setting of oppression by companies and by Government. One [district] administrator said he would send those who contested PROSAVANA to jail”.
A draft of the National Plan to Support Peasant Agriculture was presented during the Nampula Assembly. It is a proposal of an agrarian policy, articulated by UNAC and developed by our men and women peasant members, to be submitted to the Government of Mozambique. This Plan aims to address the gaps in the operational instruments of the Strategic Plan for the Development of the Agrarian Sector (PEDSA 2011-2020), and is guided by a multi-sectoral approach focused on peasant productions systems. This Plan will answer the sovereign calls of peasant families relating to the production of seeds that are native and resistant to climate change; public agrarian extension services based on the valuing of the local knowledge, culture and experience and men and women peasants; for the better use of irrigation potentials; contruction and rehabilitation of infrastructure linked to the creation of productive capacity; the definition and adoption of efficient models of access to agrarian credit, in so doing garanteeing food sovereignty and appropriate food and nutrition for all mozambicans.
On the discussion around UNAC’s Gender Policy, the movement considers that the inclusion of the issue of gender in the public policies for the agrarian sector and the actions of the movement itself is vitaly important for an inclusive and sustainable development of agriculture in Mozambique.
The current political-social which the country is living also deserved our atention and analysis during the 2014 General Assembly. The men and women peasants of the districts of Machanga, Chibabava, Maringué, Gorongosa, Nhamatanda and Dondo in Sofala; Moatize in Tete; Macossa in Manica; Rapale and Mecuburi in Nampula; Homoine and Funhalouro in Inhambane, all saw the first planting season of the year totally compromised and ruined and the hope resides in the second season, with the availability of lowland areas.
We demand from the belligerents the immediate end of hostilities, and the abandonment of the armed path as the only route to resolve the differences in dispute. It is imperious that there is an end to all military atacks and confrontations which to nothing contribute to the development of sovereign peasant agriculture, much less the wellbeing of all Mozambicans. We equally urge the parts to most urgently reestablish wider, inclusive and effective dialog mechanisms that are transparent and democratic.
No one is tired is the Struggle of the People! With our sacrifices we will reach the objectives and victories we stride for. As of us, men and women peasants of Mozambique, our commitment to the struggle for the development of peasant agriculture remains firm as ever, from the days of liberation to present day. Spade in hand and feet firm on the land we dream of a better and more viable Mozambique, where we can all feel ourselves to be the peasant children of this motherland, for which we have fought and liberated!