Home » Mexico : Solidarity with the Zapatistas 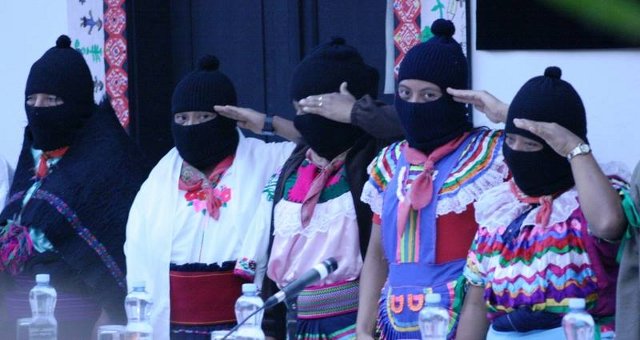 (Mexico, Buenos Aires, May 13, 2014) We are dismayed and outraged, but also firm in solidarity and struggle; we stand against the assault that ended the life of the teacher Galeano, a brother and comrade zapatista in La Realidad, Chiapas.

…Because we know that these attacks against the Zapatistas, like all previous attacks, is a product of the bad government, businessmen and imperialism, seeking to eliminate those who struggle for freedom and justice, to silence those who are planting hope. And because hope grows and multiplies experiences and struggles all over the world, confronting capitalism which has proven itself many times over to be the cause of injustice, violence and death.

Faced with the loss of Galeano, we express our solidarity, and our embrace amidst such pain, but also the conviction that at the hand of our struggles, peoples’ struggles, justice will arrive and flourish. We also express our solidarity with the wounded, with the targeted community, with families and comrades, and we tell you now that you are not alone, that we are not alone, we are together in the struggle all over the world.

As we denounced a few months ago, violence against the poor, against indigenous and peasant brothers and sisters, only pertains to the selfish logic of empire, capital and their governments. To perpetuate this logic, is to betray our class, betraying our own people, workers, ourselves. It does not matter under which organization or in whose name these kinds of violent acts occur, they only serve the plans of the enemy, who continues to indulge his own ambition and greed. Therefore we denounce this act of murder, the aggressions and damage done to the community, to the schoolhouse, and we also reject the false stories and lies that attempt to cover up the assault, which speak of confrontations and internal disputes within the community as the source and cause of the murder , as if it were a justification of these acts. There is no justification.

Therefore we strongly condemn these acts, for which we assign primary responsibility to the Mexican State and Government of Chiapas and its counterinsurgency campaign, we also attribute responsibility to the paramilitary and the organizations which are explicitly interested and act to divide, to kill and destroy for bribes and rewards they receive from the “higher-ups”.

From the Latin American and international indigenous peasant movement with our eyes and hearts we are with you, and we feel you are with us.

For Land and sovereignty of our peoples,  America struggles!