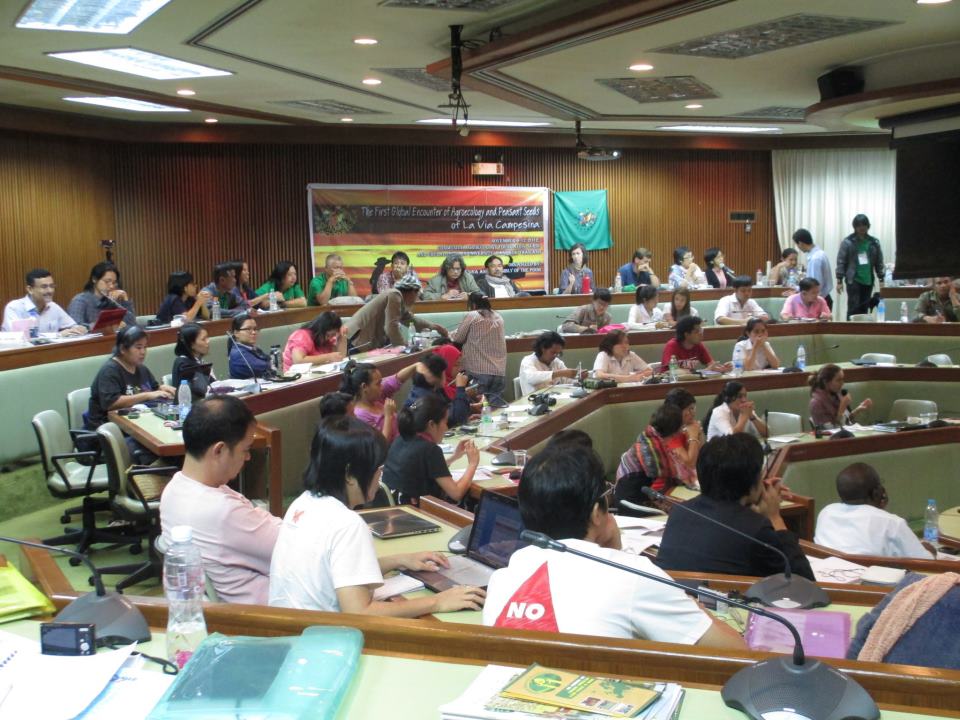 La Via Campesina International delegates, representing our regional member organizations, are meeting in Surin province of Thailand in Asia to have the First Global Encounter on Agroecology and Seeds. The main objective is for La Via Campesina to share experience and construct a strategy and vision on agroecology and seeds, in the holistic understanding that both are part of the struggle to achieve food sovereignty.

Thailand has been chosen as the place of the meeting because in this country there is a growing shift made by small-scale farmers to move from the green revolution based model of industrial farming into agroecology. The presence of international delegates will support the growth of the agroecological farmers movement in Thailand, who declare that “the survival of small-scale farmers is the survival of society!” The delegates as part of this encounter are learning much from this experience as to strengthen peasant farmer agroecology.

After sharing the experience and thoughts of the delegates and debating on the challenges, we are convinced that agroecology is the corner stone of food sovereignty. We cannot achieve food sovereignty if agriculture is dependent of inputs controlled by corporations, if the impact of technology destroys Mother Earth, if we do not challenge the commodification and speculation of food and land, and if we do not make better livelihoods for those who make available healthy and accessible food to our communities.

There are countless names for agroecological farming all over the world and Via Campesina is not concerned with names or labels, whether agroecology, organic farming, natural farming, low external input sustainable agriculture, or others, but rather wants to specify the key ecological, social and political principles that the movement defends. For Via Campesina, truly sustainable peasants agriculture comes from the recovery of traditional peasant farming methods, the innovation of new ecological practices, the control and defense of territories and seeds, and well as social and gender equity. And we welcome conventional farmers to come towards this movement.
We are clear that a feudal land holding cannot be considered agroecological even if it is chemically free. A farm that is controlled only by men without decision making power for women or if women’s global workload is higher, it is not agroecological either. Organic farming which replaces expensive chemical inputs for expensive organic ones without touching the structure of monoculture is not agroecological, such as in the way  neoliberal “organic” programs (such as “India Organics” ) do, and which we strongly reject.

The experience, the practice and the reflections of Via Campesina for at least the last four years, have shown that agroecology is a strategic part in the construction of food and popular sovereignty.
We understood that agroecology is an intrinsic part of the global answer to the main challenges and crises we face as humanity.

On the first place, small scale farming can feed, and is feeding humanity and can tackle the food crisis through agroecology and diversity. Despite the common misconception that agribusiness systems are more productive, we now know that agroecological systems can produce much more food per hectare than any monoculture, all the while making food healthier, more nutritious, and available directly to the consumers.

Secondly, agroecology helps confront the environmental crisis. Peasant agriculture, coupled with agroecology and diversity, cools down the earth; keeping carbon in the soil and providing peasants and family farmers with the resources for resilience to climate change and the increasing natural disasters. Agroecology changes the oil dependant energy and agriculture matrix, a main part of the systemic changes needed to stop emissions.

Third, agroecology supports the common good and the collective. While it creates the conditions for better livelihoods for rural and urban people, agroecology, as a pillar of Food and Popular Sovereignty, establishes that land, water, seeds and knowledge are reclaimed and remain as a patrimony of the peoples at the service of humanity.
Through agroecology we will transform the hegemonic food production model; permitting the recovery of the agricultural ecosystem, reestablishing the functioning of the nature-society metabolism, and harvesting products to feed humanity. As the Philippine farmers say “Kabuhanan, Kalusugan, Kalikasan” (for economy, for health, and for Nature).

For us, as peasant farmers and family farmers, agroecology is also an instrument to confront transnational agribusiness and the predominant agri-export model. We won’t liberate farmers from the structure of oppression built up by the corporations unless we gain technological and economical autonomy from the current forms of agrarian and financial capital.  Also, within the context of farm workers and other agricultural laborers as in the case of the U.S., if we do not recover this labor force that has been being enslaved by capital. Therefore, agroecology is an essential part of the construction of social justice in a new equal social system, not dominated by capital.

Agroecology is giving a new meaning to the struggle for agrarian reform to empower the people. The landless farmers who fought to reclaim back their land, and those who received land through land reform programs in Brazil and Zimbabwe, are implementing agroecology as a tool to defend and sustain their farming, not only for their families, but to provide healthier food for the   community. Therefore, land reform, together with agroecology, has become the contribution of peasant and family farmers to give better and healthier food to our societies. In Argentina we stand behind this affirmation by saying “somos tierra para alimentar a los pueblos” (we are land, to feed the peoples).

Our colleague farmers from India shared that there have been more than two hundred and seventy five thousand farmer suicides since 1995 because of the trap of debt due to industrial input dependence. Fortunately, the new agroecology movement method has permitted farmers to find a light of hope among that darkness, encouraging thousands of families to stay in their villages and keep on growing food with better livelihoods. This movement of Zero Budget Natural Farming has given life back to rural areas in India.

In Europe, the economic and financial crisis is also giving evidence of the potential of agroecology as a proposal of the peasant movement to the society by re-localizing markets and make food available with a much lower dependence on fossil fuel, giving a new dynamism to local economies, and creating jobs for the unemployed that are moving back to the countryside, as in the case of Eastern Europe. Agrarian reform and market regulation towards food sovereignty through agroecology is also a solution for European and U.S. farmers that suffer from low prices due to competing with cheap imports.

The peasants and small farmers from Mali, as in the rest of Africa, that have been for years under the attack of AGRA (Alliance for a Green Revolution in Africa) to push the introduction of the green revolution are showing how their own indigenous agro-ecological models of production are sustaining the food and livelihoods of millions of people; and tackling the climate shifts without any external inputs, through the sovereign management and sharing of local agro-biodiversity and knowledge.

Agroecology is also an alternative for rural youth to stay in the countryside and have a dignified livelihood, as well to stay committed to food production and distribution for the community. These are who will feed future generations.
For 20 years la Via Campesina has fought strongly for land reform, and in this historical moment, it needs to reflect on its practice to qualify it. As Brazilian landless workers shout “ocupar, resistir, produzir!” (occupy, resist, produce!), peasants around the world are already fighting for land, resisting to defend it, and now, we define that agroecological farming will feed the people. It’s time to produce.