Home » First Continental Assembly of the CLOC-VC: Conclusions of Managua 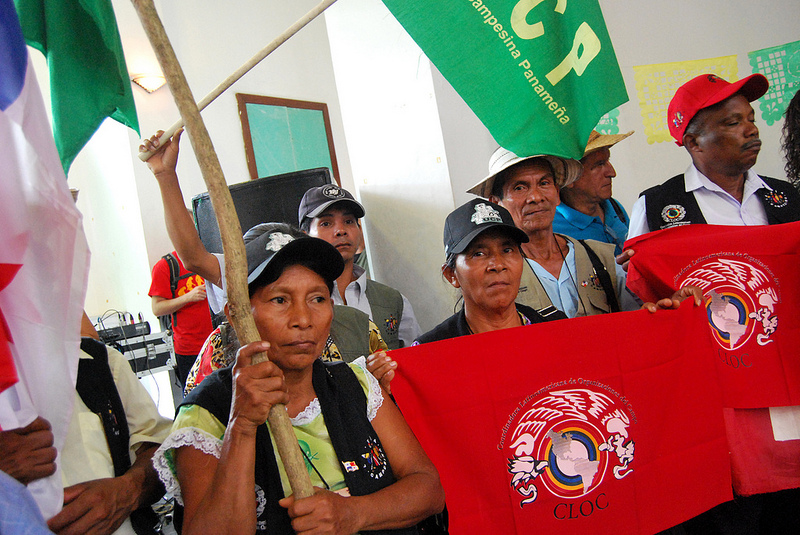 With great joy and enthusiasm from the land of Sandino, hosted by peasant organizations in Nicaragua, surrounded and strengthened by the fighting spirit and rebellion of the Nicaraguan people that strengthens the daily process of Christian, Socialist and Solidary Revolution, we have concluded our First Continental Assembly of the Latin American Coordination of Rural Organizations CLOC-Via Campesina.

Celebrating our history to the beat of heroic struggles of indigenous peoples and peasants in Honduras, Guatemala, and Panama, after three days of deliberations we concluded on the need to continue promoting the processes of struggle and organization to move towards the construction of the decent, revolutionary, and solidary society that we all desire. We call peasant and popular organizations in Latin America to strengthen our class solidarity.

Inspired by the convergence process of the CLOC that began in 1991 in Xelajú, Guatemala, and the Second Continental Campaign “500 Years of Indigenous, Peasant, Black and Popular Resistance (1989-1992)”, we express the desire to move from national organizations and movements of peasants and native peoples to the construction of our own organization of continental character.

On these lands of the Sandinista revolution, and 20 years after the Third Meeting of the Campaign 500 Years of Resistance, the 20 participating organizations agreed to promote the realization of the First Latin American Congress of Rural Organizations, which led to the formal establishment of CLOC in Lima, Peru, in February 1994. Then, 362 delegates from 23 countries, including youth, women and men from organizations of peasants, indigenous peoples, afro-descendants, and agricultural wageworkers, gathered to evaluate the progress and challenges to the accomplishment of the Action Plan emanating from our V Congress held in October 2010 in the Middle of the world in Quito, Ecuador.

Today we recognize that we live in the worst time in history given the criminal obsession of capital with trying to achieve total and absolute control over people, land, water, atmosphere and space, endangering human life and the planet. Agribusiness continues seizing our lands, evicting us en mass, imposing their hoarding, and advancing with a brutal extractivism by imposing monocultures and largescale tree plantations, imposing genetically modified (GM) agrofuel plantations, contaminant mining, and privatizing our seas, rivers, lakes, and forests. Agribusiness criminalises our seeds and imposes its own GM varieties, taking over our native and creole seeds through patent law and intellectual property.

In its effort to monopolize transnational accumulation and destroy our sources of food and livelihood, agribusiness pushes people to deeper levels of poverty, hunger, migration, and exploitation. The agribusiness model seeks complete dominance over agriculture and nature, forming a class alliance with banks, speculative financial groups, transnational corporations, owners of technological packages, local elites, mass media, public and private repressive apparatus, and the subordination of rules and laws in many nation states to the interests of capital accumulation.

Against this offensive of capital, peasant communities, indigenous peoples and afro-descendants are today the greatest bastion of rebellion and resistance across the world. Despite the great process of expulsion from our land and the territories of our people, we remain the ones who produce the largest amount of food, protect important water sources, maintain biodiveristy, and keep alive key areas of nature.

Faced with this situation, our First Continental Assembly reaffirms its determination to continue our progress in political strategies and struggle to meet the challenges at hand by consolidating our organizational structure, reaffirming our national alliances and our regional structure, approving our new charter, and taking the necessary steps to continue strengthening participatory democracy within our organization.

Along with the Nicaraguan people, we note the progress made by their struggles, as well as those of all who made a commitment to peasant organizations and food sovereignty in other countries as well. We welcome the victory of the Bolivarian revolution and its President Hugo Chavez Frias, and pledge our support for government actions to respond to the needs and aspirations of the people of the country and the city, maintaining our vigilance, our principle of autonomy, and our core commitment to food sovereignty, the struggle for land, and sovereignty of our peoples.

Our assembly reaffirms central points of our proposals, struggles, and resistance actions, and calls on our members to redouble efforts to advance the discussion, implementation, and enhancement of our lines of action from local and national, to regional and international scales.

Imbued with the spirit of Sandino and in the presence of our beloved comrades Ramiro Téllez and Egidio Brunetto on the tribune of honor of this Assembly, we reaffirm the commitment from our V Congress to permanent mobilizations to continue articulating alliances at all levels to check the interests of transnational corporations and their control mechanisms, while we seek to build a new model of agricultural production controlled by workers, continue our seed exchange, expand our marketing systems, and cultivate our own culture and spirituality. Our model of agricultural production for the future arises from our own hands, extending the struggle for land and territories in order to build a new matrix based on agroecological techniques and food sovereignty.

We prioritize the tasks of strengthening our schools and training spaces for socio-political leaders and militants, through the ongoing process of grassroots formation with the full inclusion of women and youth, and promoting schools in the countryside to train our children and youth with security over the future of our struggle. Together we will continue to strengthen our own mass media, and in partnership with multiple spaces we take up the battle of disputing ideas, meanings, messages and understanding of reality.

We confirm our position on alliance with urban workers and communities. We pledge to push harder for class unity as an imperative condition of struggle, because no singe social force can direct the changes needed in the whole of society. This involves breaking with the corporatism and sectarianism of just working on agrarian issues. Convinced that Comprehensive Agrarian Reform is required by humanity to solve the problems of world hunger, we must add other social sectors to our struggle for land and power. We also agreed to work for the defense, recovery, and recognition of the social function of land, water, and territory, and we agreed to promote agroecology as part of the solution to the deep crisis we face, manifesting ourselves in the promotion of a global campaign for the production of healthy food.

We are committed to strengthening the links between the struggle for food sovereignty and the defense of seeds, coordinating to resist the advancement of privatization laws that criminalize our seeds and our own reproduction, our exchange or our market.  We continue denouncing GM seeds as a tool of corporations for control over us and the production proccess, and as a threat to human health and the environment. We highlight the special role of women in food production, as well as the defense of seeds and healthy food, and cultivate more strongly the mystique of our Campaign “Heritage Seeds of Our Indigenous and Peasant Communities in the Service of Humanity.” 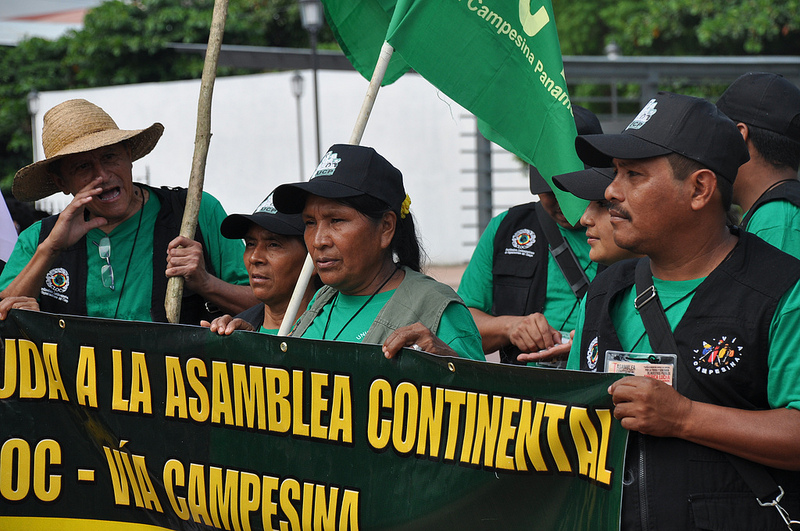 We strive to build a social project that is global, just, and equitable. Peasants reject all forms of violence against women and continue denouncing through this Assembly domestic violence in the countryside, and the violence that occurs in most of the world against women in work places. We welcome the organization and the struggle of women for their emancipation, and strive to promote gender equality and participation in positions of power, including the commitment to internalize and implement the campaign promoted by the Via Campesina “Peasants We say Stop Violence Against Women in the Field.”

We will move forward with more force in the struggle against pesticides, expanding the “Campaign against Pesticides and in favor of Life” which is carried out across our continent. Taking the path of the struggle against transnational corporations towards the improvement the quality of life (of humans and the planet), we stake the goal of eradicating pesticides in the world. This campaign is intended to be a permanent campaign of training and dissemination, mobilization and struggle, coordination with other lines of work in applied research, legal reform, and the field of communication.

We reaffirm once again our commitment to internationalist solidarity with all working people, as well as with the Cuban Revolution, and the struggle for the release of five unjustly imprisoned Cuban comrades in the United States. We determined actions to continue to support all working people and especially the resistance in Honduras, Panama, Guatemala, and Paraguay. And we support the Colombian people in their search for a just peace that respects the demands and needs of the people.

In this context we have begun the process of transition and transfer of the Secretariat to the Southern Cone area of operation, where, unless circumstances indicate otherwise, our Sixth Continental Congress will take place. The Assembly welcomed the invaluable contribution made by the organizations of the Andean region, especially those who were tapped in Ecuador to run the Operational Secretariat for four years. We value and appreciate the commitment of FENOCIN to have placed their best cadre at the service of this task, as well as the National Indigenous Peasant Movement of Argentina, which assumes that responsibility with with the same passion today.

Solidarity and strategic alliance are the foundation of CLOC-VC, and we have found many allies with whom we build bonds of solidarity, mobilization, struggle advancing common political projects and sharing opportunities for training and development of proposals that will constitute the backbone of the development of actions and campaigns CLOC-VC.

We salute the 20th anniversary of the Via Campesina International joyfully, working to make our contributions to the VI International Conference and continuing the fight against our common enemies.

We welcome with excitement and joy the fraternal reception given to us by the Nicaraguan people and comrades from ATC, ARNIG, CNOR, UNAPA, and the Agricultural and Forestry Table (MAF) of Nicaragua who have organized this meeting

Again we stand under the slogans:

Against the looting by capital and empire,

For land and sovereignty of our peoples,

No socialism without feminism!

GLOBALISE THE STRUGGLE, GLOBALIZE THE HOPE!