Via Campesina Africa Solidarity Statement on the farmworkers mobilization 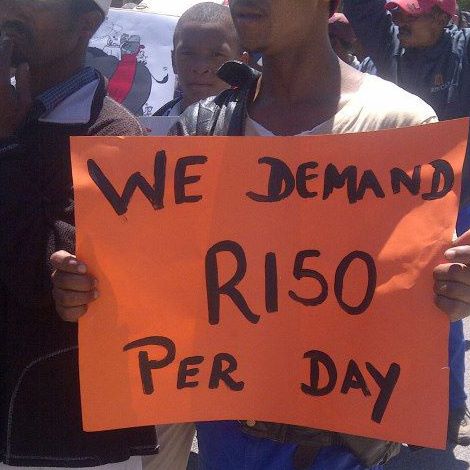 (Maputo 14th January 2013) – During the month of November last year, the world watched farmworkers strikes, particularly those working in vinyards, in the Western Cape Province, in South Africa. They were protesting against exploitation and poor working and living conditions on farms, demanding an increase in minimum wages. In many cases, South African police responded to the demonstrations with violence and intolerance and showed no respect for laws. Many farmworkers and activists were arrested, including peasants of The Agrarian Reform for Food Sovereignty Campaign, a member of La Via Campesina.

After dubious negotiations that halted the strikes in December, the South African government has refused to make any change to the minimum wage and the situation has remained unchanged. Early this January farmworkers resumed the strikes and are being heavily repressed by police.

Since the strikes began, South African civil society organizations have denounced the fact that owners of the farms and the police were acting in close concertation to repress the striking workers; they benefited from a high level of impunity. It also appears obvious that the owners of the farms are continuing to pour racist and sexist insults on farmworkers.

The farmworkers strike in South Africa has to be seen as an African movement of the rural poor protesting against injustice and explotation. The agricultural sector in South Africa employs not only South African citizens. Many of the farmworkers working in bad conditions are migrant workers: men and women from neighboring countries such as Mozambique, Zimbabwe and Malawi. These farmworkers are sometimes the most affected by the owners of the farms, who take advantage of the fact that they are in many cases working illegally and without social protection. South African commercial farming is the most powerful on the continent; it flourishes at the expense of the oppression and exploitation of agricultural workers.

These strikes are also the result of government’s failure to implement land reform in South Africa. The 30 per cent of land distribution that was promised by 2015 is very far from being implemented. In fact, in 2013 it is now 100 years since a Land Act that dispossessed millions of people from the land and turned them into the super-exploited farmworkers and the South African proletariat, was constituted in 1913. These strikes are a cry of “Enough is enough!” of 100 years of rural slavery.

The African region of the International Peasant´s Movement, La Via Campesina, declares their support and solidarity with the farmworkers in South Africa and condemns all forms of violence perpetuated by the South African Police and government against all farmworkers and activists. We join the voice of South African civil society organizations and demand that the South Africa government take active steps to listen to and act on the call of the agricultural workers who are demanding a living wage and a life of dignity.

Contacts for more information and solidarity