Over 30,000 people in Berlin demanding a different agricultural policy and a turning away from industrialized food production 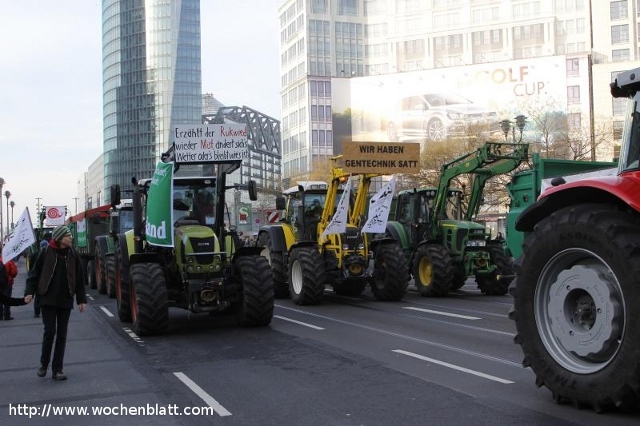 (Berlin, mid-January 2014) “Peasant farming is not modernity remote, poor or underdeveloped. It is a sustainable agricultural model, that uses natural and human resource with respect and guarantees social and food security worldwide. That’s what this year’s international year of peasant family farms stands for and it is what we stand for today in Berlin” summarizes Carlo Petrini, president of Slow Food International, on the demonstration “Wir haben es satt – We are fed up” in mid-January in Berlin one of the central concerns of the 30.000 demonstrators. On the occasion of the Green Week also this year a broad alliance of over 100 organizations, including farmers, bee-keepers, nature, wildlife, and consumer protectors, development aid organizations and initiatives for unemployed had called for mass demonstration. And those who believed the wave of protest would fade, that consumer would be tired of the struggle against a seemingly all-powerful, because unassailable, agricultural and food industry, was disappointed thoroughly. More demonstrators as in the years before had come to berlin to articulate their demands for a sustainable agriculture and for healthy food.

In addition to the slogans on countless banners this was expressed in the speeches of the closing rally in front of the Chancellery. Prince Felix zu Löwenstein, chairman of the association for ecological food economy, called for a clear no to agro-GMO’s: “The people do not want GMO’s in fields and plates. Therefore the future of all farmers in Germany depends on whether they can continue to produce GMO-free. It is crucial that the German government votes with a clear NO in Brussels against the admission of the GMO corn 1507.”

A relationship to the animal

The in recent years often thematized advancing industrialization of animal husbandry is not comprehensible to many consumers. To bring farmers and consumers closer together again, a turning away from “getting bigger” is required, Eckehard Niemann, spokesman for the network Farms instead of agrarian factories is sure about.

That many demonstrators not only think about their personal shopping basket, that they many of them understand the developments in the agricultural and food sector in the social context, was made clear by the great importance of the free trade agreement which is currently negotiated by the EU-Commission and the United States behind closed doors. In recent years, especially the patenting of plants and animals and the related dependence of a few, internationally operating companies have been perceived as a threat. Today, as part of the free trade agreement (TIPP) a loss of high European production and food standards in favour of an unhindered, industry-friendly commodity flow startles a lot of people.

The fact that the participants in the demonstration come from all parts of the society shows the meaning the origin of their food, the preservation of an intact environment, clean groundwater and an ethnically acceptable animal husbandry has for them. The increasing number of the people who are committed to sustainable agriculture shows that agriculture is seen by many people as the basis of a self-determined society