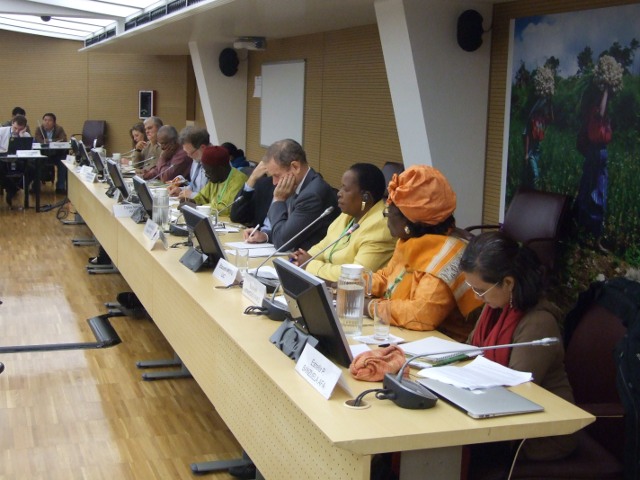 (Rome, February 21, 2014) We, delegates to the 5th Farmers’ Forum, the representatives of small-scale producer organizations, speaking on behalf of millions of small-scale farmers, artisanal fishers, pastoralists, livestock breeders, and indigenous communities, hereby communicate our opinions and proposals to IFAD and its governing bodies.

IFAD was founded in 1977 to work on behalf of the rural poor. With the creation of the Farmers’ Forum in 2005, it began to work in collaboration with the rural poor. At that time, it was way ahead of the rest of the UN system in opening up to systematic dialogue with organizations representing the intended beneficiaries of its action. Since then, the partnership between IFAD and small-scale producers’ organizations (POs) has brought significant benefits to both sides. IFAD’s image, its working methods and the effectiveness of its programs have profited from its association with our organizations. On our side, we have had some opportunities to bring our concerns to the governing bodies and the staff of IFAD, as well as to gain access to funding for our capacity building programs.

But the world has not stood still over the past decade. Since the food crisis of 2007, agriculture has climbed to the top of the international agenda, and small-scale producers are now the object of everyone’s attention. Climate change, environmental degradation, conflicts, agrarian crises and numerous suicides in many regions, desertification and water scarcity, food-related health issues, toxic chemicals, the scandal of land grabbing, food waste and commodity speculation – All of these factors have exposed the unsustainability of a food system based on industrial agricultural production and globalized value chains that reward all of the actors except for food producers and consumers. At the same time as this is happening, we continue to strengthen our organizations’ capacity to advance alternative proposals for sustainable agro-ecological production models and equitable local, national, and regional food systems. We have multiplied and capitalized on the countless resilient farming practices that our members are conducting in all regions of the world. On the governance side, the reform of the Committee on World Food Security has set a new standard for the participation in the process of decision-making of those most affected by food insecurity and malnutrition.

New challenges and new opportunities have opened up for the Farmers’ Forum partnership that IFAD established with us almost a decade ago. If we do not grasp them, our collaboration risks stagnating. However, If we take advantage of these challenges and opportunities, together we can make significant contributions to addressing some of the most serious issues that the world faces today. This year, the International Year for Family Farming, is the time to act. It is with this intention that we put forward the following proposals.

Smallholder family farming should be recognized as a pillar of local, sustainable development and a substantial guarantee for food sovereignty and peace and stability in the world. This vision has to be expressed at every level and implemented in national actions That have positive effects for every community. The International Year of Family Farming 2014 should constitute a significant step forward in improving the quality of life of hundreds of millions of smallholder family farmers, fisherfolk, livestock breeders and indigenous communities. We expect concrete initiatives and policies that will include mobilizing resources and improving access to land, water, oceans and other inputs and natural resources. Agroecology and organic agriculture should be promoted, and farmers’ control over their production, especially With regard to their seeds and indigenous species of livestock and fish, should be strengthened; their rights of use should not be violated.

We call upon IFAD to work with us to:

Enhance the image of small-scale family farming, pastoralism and artisanal fisheries as the source of 90% of the food consumed in the world; obtain formal recognition in each country of the status and profession of small-scale family farmers, pastoralists and artisanal fishers ; and, through specific proposals, technical assistance and exchanges between countries and continents, Engage in the formulation of more effective policies and support for smallholder producers.

– Facilitating policy dialogue beetween smallholder producer organizations and governments is the top priority at the country level. IFAD should provide increased support for the implementation at the national level of the Committee on World Food Security’s recommendation calling on governments, small-scale producers and other actors to develop a national vision for the future of smallholder production. This would provide a concrete occasion to establish national multi-actor dialogue platforms in which all genuine small-scale producer organization are included.

– Although there has been progress in involving our organizations in the national programmes (COSOPs) and in providing grants for our own organizations, we are still excluded from the design, implementation and evaluation of too many of the projects/loans which constitute the bulk of IFAD operations. The existing examples of such projects being implemented in a tripartite arrangement, involving IFAD, the government and the farmer organisations, need to be multiplied.

– More attention should be given to issues of concern to FOs, such as risk management in agriculture, the guaranteeing of funds in order to facilitate access to credit, and the resolution of conflicts over natural resources.

– A global grant programme should be established to provide direct support to organizations of farmers and fishers, in order to increase their capacity in policy and economic areas as well as to strengthen their initiatives. It should contain specific programs for women and youth, including their leadership and capacity development and the establishment of women and youth wings. It should also provide support for farmers’ schools and training centers for smallholder sustainable agriculture, and for the inclusion of training modules on agroecology in the agricultural school system.

Strengthen the interaction between the Farmers’ Forum and IFAD governance

– A more continuous and autonomous functioning of the Farmers Forum and its Steering Committee is necessary. This would allow a qualitative leap in the functioning of the Forum, improving its analysis and its interactions with IFAD at different levels, and would lead to a more effective contribution on the part of farmer organisations to IFAD programs and initiatives. Taking into account the changes that have taken place since the founding of the Farmers’ Forum, a reform of the Steering Committee is necessary in order to clarify its mandate, composition and working methods. We expect that IFAD will accompany this next step in our deepening collaboration.

– Set up a dialogue with IFAD governing bodies on key issues related to IFAD’s mission and concepts, such as value chains, adequate technologies and investment, and market access.

– IFAD and our organizations should strengthen our coordination in support of the interests of small-scale producers in international forums/institutions, such as the Committee on World Food Security, and in programmes such as the Global Agriculture and Food Security Programme.

– IFAD governing bodies should adopt CFS policy instruments such as the Guidelines on land tenure and the recommendations of the roundtable on investing in smallholders adopted at CFS40. It should apply them to IFAD projects and programs, and support their implementation at the national level, promoting the participation of small-scale producers’ organizations.

-IFAD should also align its goals with the Convention on Biological Diversity (CBD) and with the Cartagena Protocol on Biosafety.

We call upon the governments to:

– Resolve the agrarian crises in their countries. The measures to do so include making effective use of the resources made available by IFAD, implementing the CFS guidelines on land tenure and the FAO guidelines on small scale fisheries, as well as undertaking agrarian and aquatic reforms and investing in smallholder production – including appropriate infrastructure and credit facilities.

– Continue to support IFAD as a key institution that channels resources to the smallholder, food producing sector, and to make the necessary resources available in the coming years for an ambitious agenda that will be launched in this International Year of Family farming,

– implement the decisions taken in the CFS and in the International Conference on Agrarian Reform and Rural Development (ICARRD), as well as the findings of the International Assessment of Agriculture, Science, and Technology for Development (IAASTD), calling on IFAD support when it is appropriate, and use these decisions as central guideS for the elaboration of IFAD programs and projects,

– Involve producers’ organizations in the design and implementation of all IFAD programs and projects and in the IFAD Country Program Management Teams.

We call upon our organizations to:

– Make a commitment to working together in solidarity and mutual trust, and to promoting our common agenda on smallholder food production,

– continue to build our organisations, enhancing our capacity to participate effectively in dialogue and collaboration with national governments and regional and international institutions including IFAD, and strengthening our capacity to provide services to our members.

– create room for women and youth in order to ensure that they gain an effective space in our organisations and that their concerns are given a high priority in our work,

– strive to achieve a participation of 50% women and 30% youth at the next global meeting of the Farmers Forum.