Declaration of the The Alternative Mining Indaba 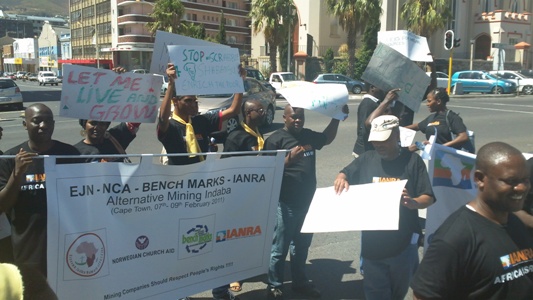 Having gathered at the Ritz Hotel, Cape Town on the occasion of the 5th Alternative Mining Indaba (AMI) from 4th to 6th February, 2014, express our deep concern in how development is shaping investment including extractives and the continued limited contribution of the extractive sector in the development agenda of African Countries especially to the lives of ordinary people.

The representative persons from organisations in Africa, Latin America, Asia, and Europe met and reaffirmed their belief in a society that puts people first before profits. Once again we find ourselves confronted by corporate greed and the lack of government will in protecting the environment, social and economic well-being of communities.

We stand in solidarity with workers, women and men, young and old, who have lost their lives and livelihoods as a result of unscrupulous mining companies, and demand the protection of the rights of communities and particularly defenders of rights, who continuously suffer under oppressive regimes. We are especially saddened by the mining deaths yesterday of 8 miners at Harmony Gold mines in South Africa and a woman at Grootvlei mine.

The Alternative Mining Indaba is organised in response to the annually held Mining Indaba that aims to bring together Investors and governments interested in African mining. You can download and read the whole declaration of this Alternative forum here.