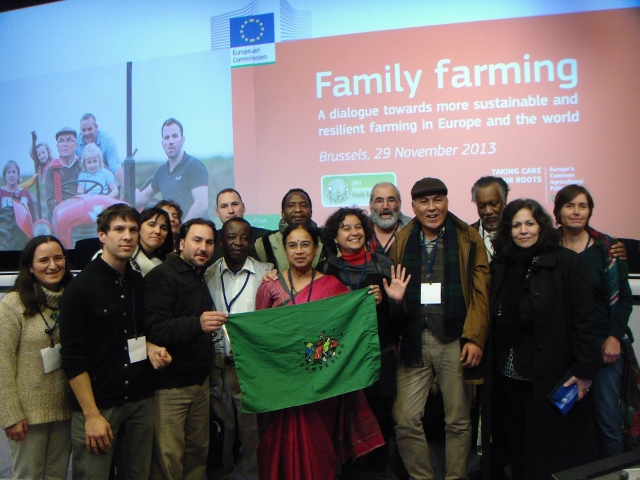 To kick off the 2014 International Year of Family Farming the European Commission (EU) recently organized a conference in Brussels. La Via Campesina (LVC) sent men and women farmer leaders from India, Mozambique, Nicaragua, Argentina, the US, Mali, Morocco, Italy, France, Croatia, Romania, Spain and Norway. LVC leaders defended our vision of a peasant- based family farming model and highlighted its vital importance to the European and global economy and its crucial social and environmental benefits. LVC’s vision of family farming is based on agroecological principles and labor intensiveness – and not capital. Our family farms are able to adapt to the infinite diversity of natural, social and economic conditions. Peasant–based, agroecological, small-scale family farms guarantee security and diversity of food for the majority of the people across the globe. They are living examples of social, economic and ecological sustainability. Our model of agriculture provides chemical-free food for local consumption and not for export – to support life, and not speculation

LVC’s farmer leaders, with their African, Asian, Latin America and European faces, spoke out showing courage, humility and steadfast commitment to family farming and peasant life. We encouraged re-localization of agricultural products and markets and presented model policies, based on the principles of food sovereignty that could support, maintain and increase economic and social sustainability of the peasant-based agriculture model. The European governmental representatives present did not expect the applause that followed every time a Via Campesina peasant leader spoke from the floor. They witnessed the true voice of the peasant “speaking truth to power” and giving hope through a vision of a better future for agriculture and food for all.

European Governmental representatives gave us the old fairytale stories of the vast potential for private public partnerships between the large industrial-scale agribusiness corporations and the small-scale family farmers to feed the world and they spoke of a supposed “free market” where we can all compete on a level playing field.

Let’s look at some facts – with access to only 20 -25% of the world’s arable land small scale family farmers across the world feed 70% of the world’s people; while according to the UN World Food Organization, the FAO, more than 40% of the food products that enter the transitional agroindustrial food chain is lost to decomposition.

The corporate giants, who promote biotech “quick fixes” and chemically dependent agriculture, join with finance capital and investment firms to play with the markets that impact our access to food. They have now joined together to create an epidemic of speculative land-grabbing further restricting peasants’ access to land. These corporations are spending millions of dollars world-wide to lobby and pressure international institutions and national governments to pass seed and agriculture laws and “free trade agreements” that create conditions that are favorable only to them. They actively undermine the rights of both peasants and consumers.

Family Farmers will fight to feed the world while supporting life and freedom.

Published in February 2014 in www.fairworldproject.org