Home » La Via Campesina Message of Solidarity with Cuba, in their time of national mourning 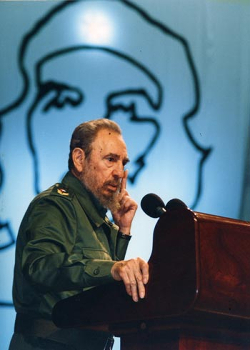 (Harare, 30 november 2016) We the men, women, and youth of La Vía Campesina, salute the people of Cuba during their time of national mourning over the death of Comandante Fidel Castro Ruz, historic leader of the Cuban Revolution and an inspiration for struggles of emancipation of poor people of the world, from imperialism and capital.

We would like to express our most heartfelt condolences and solidarity with our brothers and sisters of the Asociación Nacional de Agricultores Pequeños (ANAP) who, inspired by Comandante Fidel, have led the fight for food sovereignty and in this way feeding the people and protecting the natural resources. Just a few months ago, during their national congress, the members of ANAP celebrated the anniversary of the Agrarian Reform promulgated by Comandante Fidel 57 years ago.

To our brothers and sisters who work on the land: we are united with you in this time of national mourning paying posthumous homage to Comandante Fidel and with ANAP’s untiring struggle to achieve food sovereignty through the use of a sustainable agroeconomy, because it is through this work that ANAP continue to keep alive the revolutionary spirit of Comandante Fidel.

To the people of Cuba, we restate our commitment to friendship, our appreciation for their example of solidarity with the people of the world as well as our admiration of the irrefutable accomplishments in the construction of a socialist society.