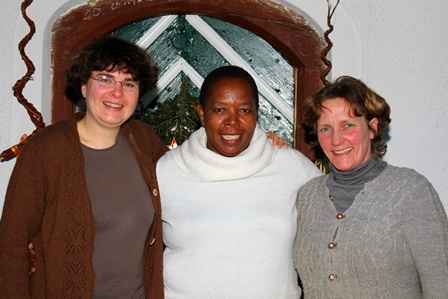 (Germany, Teisendorf, January 21, 2015) On the afternoon of January 21, 2015, before the talk of small farmer Elizabeth Mpofu from Zimbabwe, general secretary of the international peasant organization “Via Campesina” and Co-founder of regional farmers-organizations, on the evening of the same day in the “Alten Post” Teisendorf, did freelance journalist Alois Albrecht have the chance to do an interview with Mrs. Mpofu about themes other than those, that she would cover in her talk in the evening.  The questions had to do, not only with the country in South-East Africa, but also with the general situation of small-farmers in other African countries.

Q. Mrs. Mpofu, how was land in Zimbabwe distributed, after the removal of the white minority government of Ian Smith?

At first, the approximately 4,500 white landowners of huge tracts were, as was stipulated in the time between September 10 and December 15. 1979 held negotiations at Lancaster House, still treated preferentially. The Blacks, still treated almost like slaves, worked for the few white large land-holders who owned about 70 percent of the fertile arable. This changed in 2000 when President Robert Mugabe’s government decided to expropriate this land through state acquisition following the failure of the willing-seller-willing-buyer market approach. The acquired land was redistributed mainly to the landless and land-short from overpopulated communal areas under two resettlement schemes: A1 and A2 scheme. This resulted in declines in agricultural production particularly those crops dominated by white landholders. This was also compounded by periods of drought. However, since 2008 the production started to increase. Some new A2 farmers also received their 99-year leases around that time, giving the assurance that the land is now theirs. I am one of these farmers and I own about ten hectares, together with my husband.  We grow corn, sorghum and millets, as well as vegetables and we have a few cows, goats and chickens.

Q. You engage yourself in Via Campesina and some more small-farmers organizations, what are your goals in doing that?

I would like to continue and strengthen with my engagement the traditional small farming, that is not primarily profit-oriented, but to keep soil fertile, keep bio-diversity and attain food sovereignty. This will help other farmers and their regions.

Q. You are now on a tour of Germany for a few days, to explain your life as a small farmer in Africa.  What dangers do you see at present for the traditional small farming sector, as you would like to have it in Africa?

Of course, some of the conflicts in African countries present a danger to small farmers. I see however an even greater danger through the constant mingling and efforts for control in African affairs by the Europeans and Americans through G8. This organization treats us still, as if we were their colonies.  They make, behind closed doors, together with politicians and lobbyists of big agrarian conglomerates, contracts and deals of procedures, without any regard, inclusion or influence of African societies or small farmers.  These deals serve actually only these giant agrarian conglomerates and their maximization of profits.

Q. Can you name some specific examples and their effects on African small farmers?

Yes!  An initiative of the former G8, the “New Alliance for Food Security and Nutrition in Africa” is a good example of that.  This “Alliance” was decided on at the 2012 G8 meeting at Camp David, Maryland and announced by President Barack Obama. British Prime Minister David Cameron gave the promise to mobilize the “Full Might of the Private Sector” for this Alliance.  The Alliance portrays itself as an element of the “Comprehensive Africa Agriculture Development Program” (CAADP).  In reality it differs substantially from the goals of this program, to promote small farming, and even undermines them.  The public was excluded from all negotiations for the Alliance.  The later published, general summary makes it difficult for small farmers to gain a complete, all-encompassing impression of the Alliance.  Clearly however, the Alliance wants an industrialization of agriculture.  Through the Alliance, land-grabbing in a big way will be made possible and the use, passing on and exchanging of seeds between small farmers will be prevented.  Too much emphasis is also being put on plants, like tobacco, which are obviously meant for export, instead of assuring food-sovereignty for the people.  As examples taken can be Burkina Faso, Malawi, Tanzania and Mozambique.  In Burkina Faso, only 22 percent of the arable land is slated to go to small farmers, the bulk is reserved for big investors.  In Malawi there are at present already 200,000 hectares peddled off to big investors and the growing of tobacco is touted as contribution to food-security.  In Tanzania and Mozambique, agricultural corridors have been created for large investments and new laws are being formulated, that will criminalize the informal exchange of seeds between farmers.  Obviously, many NGO´s see the “Alliance” with great criticism, because, as I know, only in Germany has ten of these NGO´s and no fewer than 80 worldwide, signed petitions against this “Alliance”.  This Alliance is in my view very comparable to TTIP and TiSA, where the negotiations also take place in a completely undemocratic manner and the perpetrators will try to dupe the public into accepting the results.

Q. Do you see a possibility, that through things like the Alliance, TTIP and TiSA, there could develop not only a new colonialism, but an almost worldwide economic dictatorship?