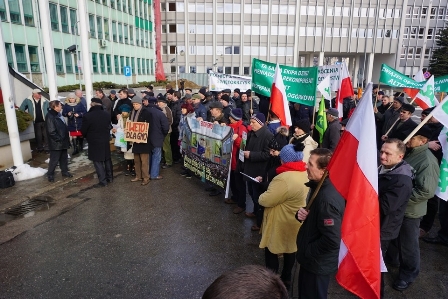 (Poland, February, 5 2015) This week thousands of Polish family farmers turned out to protest in over 50 locations across the country. Over 150 tractors blockaded the A2 motorway into Warsaw on the 3rd February and hundreds more continue to close major roads and picket government offices in other regions. The farmers are vowing to continue the struggle until the government agrees to enter talks with the unions and commits to addressing what the farmers see as a crisis in Polish agriculture.

These actions represent a dramatic escalation of protests that have been simmering across the country over the last year. Edward Kosmal, chairman of the farmers protest committee for West-Pomeranian Region said: “We are ready for dialogue. We look forward to meeting with you Prime Minister and beginning a comprehensive government commitment to solving the problems of Polish agriculture. If you do not enter into a dialogue with the Union, we would be forced to tighten our forms of protest.”

The four key demands of the farmers are:

-Land rights – implement regulation to prevent land-grabs by Western companies and to protect family farmers rights to land – (NB. From 2016 foreign buyers will be legally able to buy Polish land).

-Legalize direct sales of farm produce – the government must take action to improve farmers’ position in the market, including the adoption of a law to facilitate direct sales of processed and unprocessed farm products (NB. Poland has the most exclusionary policies in Europe around on-farm processing of food products and direct sales, which make it impossible for family farmers to compete with bigger food companies).

-Extend inheritance laws to include land under lease as a fully legal form of land use.

-Ban the cultivation and sale of Genetically Modified Organisms in Poland.

Quotes from Solidarity farmers trade union press releases on the 2nd and 3rd of February:

“We demand a legal ban on GM crops in Poland. The value of Polish agriculture, unique in Europe, is the unpolluted environment and high quality food production. These are decisive for our competitiveness in global markets.”

“We are entitled to conclude that the European Union blindness deprives people in our country from thinking in terms of the importance of development for Polish citizens, and thus the Polish economy”

“We demand the introduction of legislation that will protect Polish land from exploitation by foreign capital! Agricultural land cannot be sold to commercial companies. It’s part of Polish territory. Once sold, it will be lost.”

Take Action Now:  Please send expressions of your support for Polish farmers to