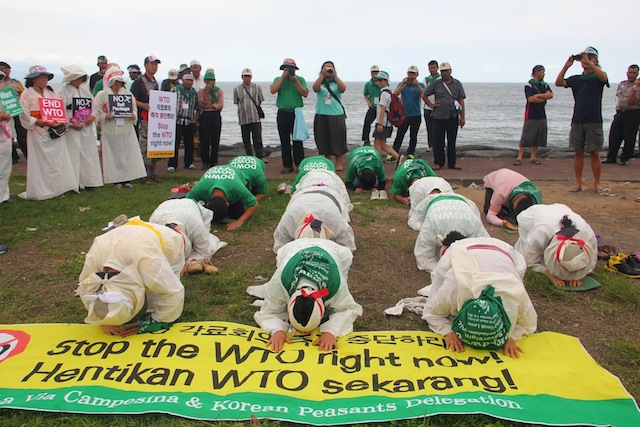 (Dec 5, Denpasar, Bali) Representatives of social movements from around the world carried out a dramatic silent procession inside the ministerial venue in Nusa Dua to commemorate the self sacrifice of their comrade, the Korean farmer Lee Kyung Hae. Lee lives on in their struggle.

Lee Kyung Hae took the extreme step of stabbing himself to death outside the conference halls of WTOs 5th ministerial in Cancun in 2003. He climbed atop a fence outside the WTO meeting, wearing a sign that said “WTO Kills Farmers” and then proceeded to immolate himself, shocking the world and reminding everyone that the WTO literally spells death for farmers around the world.

The protesters, led by Korean Farmers, walked in a column through the halls of the BNDCC, the venue of the ministerial,  in complete silence, holding their colorful flags and carrying flowers. A photo of Lee was placed in the courtyard and people placed flowers, fruits and symbolic offerings to honor Lee. The protesters also placed a photo of Lee on one of the walls in the center of the venue where there is a pictorial history of the WTO’s official negotiations to mark 2003 as the year of Lee’s sacrifice.“We will never forget the death of our comrade Lee or the hundreds of other farmers that die everyday of poverty because of the WTO’s free trade regime. We want to show the world the real face and impact of the WTO on the people,” said Yoon Geum Soon of the Korean Women Peasants Association and a member of the International Coordinating Committee of La Via Campesina.

“We want to remind the world the the WTO kills farmers, just as comrade Lee had done by taking his own life. In India, 1 farmer commits suicide every half an hour because of the cycle of  indebtedness caused by free trade. We demand our governments to stand firm against any attempt to deny small farmers their right to food and livelihoods,” said Yudhvir Singh of India.

Meanwhile a large group of Koreans carried out a simultaneous action at the Sanur Beach in Denpasar, doing a death ceremony for the WTO . They will make a hundred bows each in the Korean style to remember their comrade Lee and highlight the disastrous impacts of the WTO. 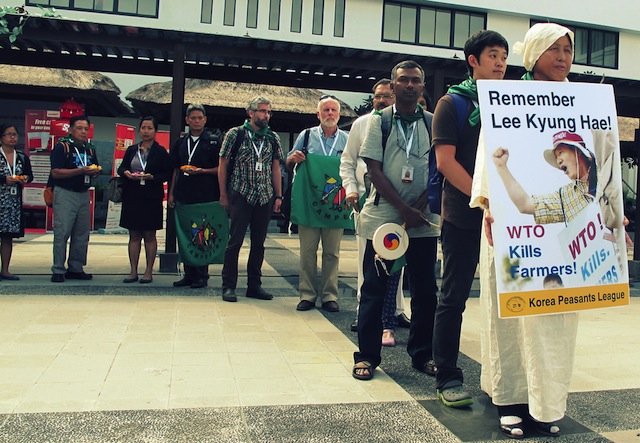 The action was carried out by La Via Campesina- the international peasants movement with 200 million members along with Social Movements for an Alternative Asia (SMAA), a newly formed coordination of Asian social movements and Gerak Lawan- an alliance of Indonesian Peoples Movements against Neocolonialism and Imperialism.