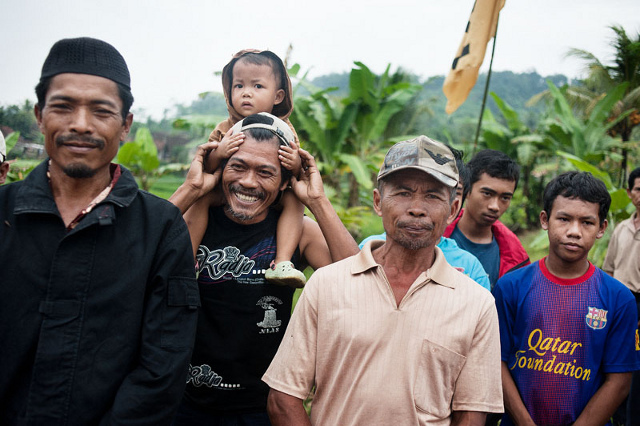 Kampong Lio, Sirnajaya Village, Warungkiara District, Sukabumi, West Java, Indonesia. This place can be described as a village being transformed. The majority of its citizens, especially the young people, work providing rafting tours. However, Wisnu Hermawan (31) and a small group of people still choose a life as peasants.

One fine afternoon, Wisnu and his three peasant friends gathered together in an open hut partially walled with wood. They drank tea from a bamboo cup and snacked on papaya, getuk (a snack from cassava), as well as other snacks of cassava. Kangkung and sawi (both are local vegetables) are planted around that hut . Not far from the vegetables plots, there is a compost pile of dung and straw wrapped in plastic. That one meter pile of natural fertilizer would be used as nutrients for the plants.

Wisnu and his friends talked about some usual farming stuff and of course other mundane topics in the shady huts. Hanging on the wall, there was a chalkboard showing the development of plants, such as spinach and rice planting timing. There were also natural farming procedures in English. In one corner of the hut, there was a poster, calling for the empowerment of women peasants.

The land where they plant and grow vegetables belonged to Perhutani (the fovernment forestry company) and was previously used by PT Sugih Mukti Perkebunan Halimun, a rubber plantation. However, since 1998, the right to cultivate (for HGU) over that area of approximately 731 acres had ended.

Then, local people around the area took advantage of the 380 hectares of land, including for farming and planting various types of plants. The remaining land is used by the government to build several facilities, such as prisons, schools, and markets.

“The agricultural pattern was still using chemical fertilizers. Throughout the years, this land was planted continuously without stop, ” said Wisnu.

As a result of this kind of farming for 10 years, the soils of the land in the region was exhausted. Fertility was reduced so that the harvest was not optimal. In 2008, the Indonesian Peasants Union (Serikat Petani Indonesia-SPI) Kampung Lio assisted farmers to preserve the land and become sovereign peasants . Wisnu was one of the young farmers who joined the union.

At that time, Wisnu was trying to become a farmer. “Previously, yeah, (I was) just hanging out here and there. Finally I tried to farm, “said Wisnu who did not complete his education in STM Cisaat Teknika (Technical Senior High School), Sukabumi. Before trying to become a farmer, he had worked as a mechanic, but do not get along with the job. “Mechanics is not my field,” he complained.

Joined with the peasant union, Wisnu is able to gain agricultural training in a number of cities. However, the agricultural training he is most proud of was the peasant exchange to Karnataka, Bangalore, India, in the end of 2011. “Wisnu quickly understood the material of that training because in his daily life Wisnu is a real farmer,” said Rahmat Hidayat, SPI staff, who accompanied Wisnu to India.

The two-week exchange program made Wisnu smarter with the use of natural farming methods. He’s gaining an understanding about natural farming with minimal cost (zero budget natural farming). It relies on natural ingredients that are common in the surrounding fields, such as using the fertility from cow and goat dung. “If you run out of raw material for composting, we go around to livestock owners, to the neighboring village, and ask for manure. Once collected, we process them into compost here,” he said.

The material is mixed with straw and dried leaves, stacked for two months, and stirred every two weeks.

To fertilize the paddy, peasants mix papaya or banana with rice water, and then sprayed onto the rice grains. They also plant Ki Hujan trees  (Samanea saman) on the banks of Kali Cilandak adjacent to the field as a hedge plant. The tree produces nitrogen to fertilize the soil.

The use of natural ingredients makes peasants independent from the market price. It is one form of their sovereignty. Another form of self-reliance is that the peasants grow vegetables and fruits around their homes and fields.

The planting and harvesting time of this natural farming was a bit longer than the farming methods that rely on chemical fertilizers. Rice, for example, can only be harvested after 40 days old, or 10 days longer than normal. Chili, onion and another of its kind can be harvested five to ten days later.

The agricultural model that Wisnu promoted in his neighborhood also sparked controversy. Many peasants seem to have become “spoiled” from industrial production methods. They are reluctant to go back to the old-fashioned way of farming.

From the remnant of 731 hectares HGU, peasants tried to reclaim 380 acres for planting. There are about 1,040 families who rely on farming life in the land, covering an area of 80 acres which are planted to rice, 200 hectares to plant cassava, as well as the rest of the crops and legumes.

Of 380 hectares, it is only about 1.8 acres that is planted by natural farming. However, there is always a small step to take before you can run. The move was started by Wisnu and his friends in Kampung Lio. In mid-May, the international peasants organization La Via Campesina appreciated the move by bringing hundreds of peasants from all over the world to Kampung Lio, Sukabumi.