Home » Colombia : International Call for Solidarity with the National Agrarian and Popular Strike 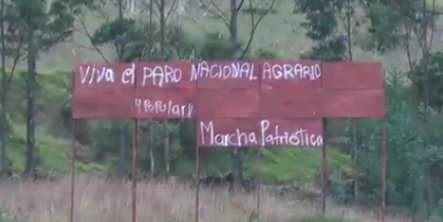 We – Farmer, Indigenous, Fishing, Women and Farmworker Organizations who are part of La Via Campesina and follow a global model of class solidarity and internationalism – express our undivided support and backing to the close two hundred thousand peasants, farmers, transporters and miners who have mobilized for the last ten days in the National Agrarian and Popular Strike, organized by grassroots and rural sectors throughout Colombia.

The National Agrarian and Popular Strike that began August 19th is a response to the absolute refusal of Colombian President, Juan Manuel Santos, to acknowledge the dire hardship facing the agricultural sectors and establish a dialogue with social movements to deal with the serious crisis facing the country.  This crisis is mainly due to the approval and implementation of neoliberal policies like the Free Trade Agreement (FTA).
Large tracts of land concentrated in the hands of few, the forced displacement of farmers from their lands, the systemic and increasing violation of rights and the use of force against farmers by the security forces, the increasing criminalization of those participating in social protest, and the favoring of resources toward large multinational mining and energy companies, are some of the major consequences that are further impoverishing farmers.  According to the United Nations Organization for Food and Agriculture (FAO), there are eight million people suffering from hunger.

Whereas the call for action and the mobilization of millions of Colombians by the National Agrarian and Popular Strike has been a massive response to the crisis, it is unacceptable and deplorable that President Santos to claim, “the National Agrarian Strike doesn’t exist.”  There are millions of people protesting in the streets, at least four deaths, arrests, roads are closed, and a heightened police presence throughout the country.  The attitude of denial toward the National Agrarian and Popular Strike by the current President makes it impossible for dialogue and undermines the democratic process.

In this context as Via Campesina members we demand:
– For other countries to intervene and request the Colombian government dialogue with the national organizations who have called the National Agrarian and Popular Strike.

– The Colombian government to release immediately our colleague, HUBERT DE JESUS BALLESTEROS GOMEZ, who was arrested on 25 August in Bogota on false charges.  Additionally, to release the nearly 250 people arrested and charged for participating in the protest.

– Stop the criminalization of those who protest for a dignified life in the countryside.  It is their right to protest.

– Repeal the law 90.7 that puts the technical control of seed production and commercialization of seeds in the hands of transnational corporations and prohibits farmers from using the native seeds that they have traditionally saved.

– The intervention and involvement of international organizations who defend human rights to demand a quick and real solution to the current situation the country is dealing with.

– To the national and international community and to the human rights advocacy organizations to demand security and safety for the participants and spokespersons in the National Agrarian and Popular Strike.  In recognition of the importance of realizing peace and democracy in Colombia, we confirm that it is essential to transform the economic and political structure, requests that the Colombian people and social organizations have been  demanding for years and governments have repeatedly not respected.

It’s time to talk on equal terms and with a clear agenda about the struggle and dreams of all sectors of society.

With this context in mind, and with a commitment to express solidarity with the struggle in Colombia farmers are faced with, we call on the international organizations allied with Via Campesina organizations worldwide, all allies and partner organizations to protest in favor of a just protest for the Colombian population.

FOR LIFE AND FOR UPROOTING THE SOCIAL INJUSTICES
NATIONAL AGRARIAN AND POPULAR STRIKE
GLOBALIZE THE STRUGGLE, GLOBALIZE HOPE!