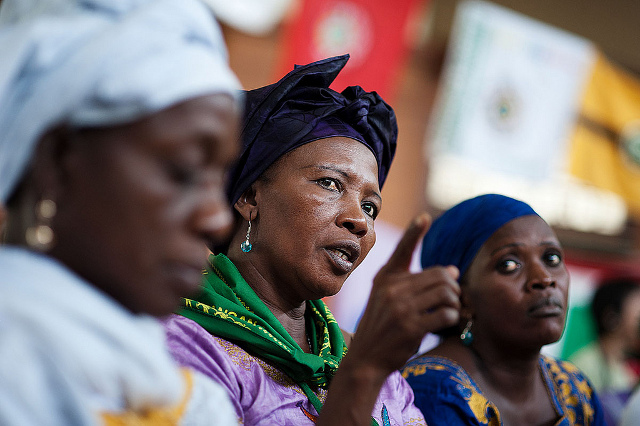 Lilongwe (Malawi), 18 August 2013 – Peoples Dialogue, Via Campesina, the Rural Women Assembly, together with other movements, have met for two days, and came up with came out with alternative practical solutions to end rural poverty and promote people-driven development in the Southern Africa Development Community region (SADC). These alternative solutions on issues that affect directly lives of the small-scale farmers and rural women movements from across the region were handed over to representatives of the Heads of SADC states on Saturday 17.

The SADC Heads of States gathered in Lilongwe, Malawi, at their 33rd ordinary Summit, from 16th to 17th August 2013.

The President of Malawi and incoming SADC chairperson, Joyce Banda, highlighted in her opening speech that agriculture and free movement of people will be priorities during her term, however, she also emphasized a focus on agribusiness . The statement of Joyce Banda tacitly implies that the very same model, which has been taking away peoples’ sovereignty and control over their seeds and food production systems, will be promoted in SADC and will provide more opportunities GMO seeds to further penetrate  into the region. Such a false solution to food crisis in the SADC and Africa, imposed from above, will only worsen the situation.

Small-scale producers and the rural women know that programmes such as the Green Revolution, the Alliance for Green Revolution in Africa (AGRA), the Comprehensive Africa Agriculture Development Programme (CAADP) and the G8-New Alliance for Food Security & Nutrition are and will continue to destroy peasants if they sit back and allow Government Heads to make decisions on their behalf. In countries such as Mozambique land grabbing by the “profit before people” investors, continues unabated with the blessing and cooperation of the government (e.g. ProSavana for Soya beans, agro-fuels and other export crops). Land grabbing of perceived “idle” and “underutilized” land must be stopped and investments, which are pro-poor, environmentally and ecologically should be promoted.

Thus, in the document delivered to the SADC Heads of States, farmers’ movements have demanded a GMO free SADC and that companies such as Monsanto and ProSavana MUST get out of Africa. The SADC governments should subsidize sustainable peasant agriculture production systems and develop local markets for their produce and be linked to home industries, thus creating employment for both rural and urban populations, if inclusive development is to be achieved.

The small-scale farmers and rural women from the region had an opportunity to meaningful engage, share information and farming materials, with their Malawian counterparts during a farmers exchange field visit in Lilongwe South, organised by the National Smallholder Farmers’ Association of Malawi (NASFAM). They witnessed how the local small farmers organized the production and market systems of rice and groundnuts, which have evolved and became integral to their community livelihoods, including employment creation through value-addition processes.  This is a testimony that clearly illustrates that the small-scale farmers can produce food and contribute to wider development nationally if their social and economic endeavours are supported.

The SADC must implement the commitments of the Maputo declaration NOW and Food Sovereignty must be adopted as a policy by all SADC countries. Gender equity, particularly rural women and youths’ rights, control and access to arable land and natural resources must be enshrined in our countries’ constitutions and community ownership of natural resources should be promoted. Moreover, an integrated SADC mining charter to guide investment and stifle intra-competition by regional governments should be developed that would put an end to over-exploitation of mineral resources and labour within the region.