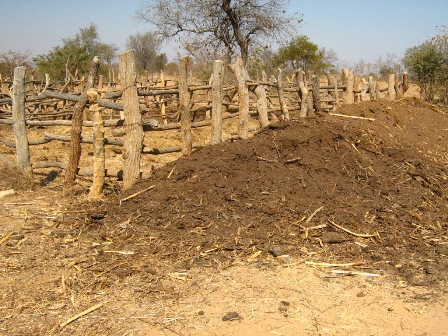 (Zimbabwe, Masvingo, October 20, 2014) Zimbabwe Small Organic Farmers Forum (ZIMSOFF) represents smallholder farmers practicing organic agriculture in Zimbabwe, a practice promoted through participatory ecological land use planning and management, and encourages value addition to uplift the welfare of members. The organization has about 19,000 smallholder farmers organized in four clusters, namely the western, eastern, northern and central. These clusters are made up of 64 Smallholder Farmer Organizations (SFOs) which nurture dynamic alliances. Shashe SFO, where the Agroecology School is located, is under the central cluster. Shashe farmers are beneficiaries of the Fast Track Land Reform Programme implemented by the Government of Zimbabwe in 2000. They are part of the 380 official land beneficiaries resettled in 2000 at the Shashe block of farms, which covers about 15,020 hectares. Of this area, about 23% was allocated for residential and arable purposes, the rest is grazing. The area is generally dry, receiving about 400mm of annual rainfall, and has deep soils (sandy loams, red clays and a mixture of the two). It was mainly used for ranching by the former white farmers. The new farmers have broadened the land use as they are now producing both crops and livestock

At Shashe farmers employ various agroecological practices to ensure food sovereignty, mitigate climate change effects and reduce dependence on bought-in agro-inputs thus retaining farm income within the family’s purse. These practices include the use of organic manure, mulching, minimum tillage, multiple cropping, exchange and use of traditional seeds and open pollinated varieties, among others.

Promote use of organic manure

The Shashe SFO famers use manure, mainly from cattle and goats, to fertilize their fields and gardens. The crop residues, particularly maize, commonly used make and bulk manure. These are fed into the cattle kraal after harvest and trampled upon by animals, mixing with dung and urine. Some of the farmers, however, use enriched composts (various plant materials mixed with poultry manure). At Agroecology School, they also use liquid manure, made from 40-50kg manure, sometimes mixed with legumes and leaves to increase the nitrogen, in a sack and suspended in a 300-litre drum partially filled with water for 10-14 days. The nutrient rich water is then diluted and applied to crops as top dressing.

Some farmers like Mr Mavedzenge use anaerobic conditions to enrich kraal manure thus completely destroying the weed seeds and significantly increasing the nitrogen content from 1% to 3%. This manure, he added, is weed free, cool and ready to be used by the plants.

According to Mrs Mudzingwa, the plants that grow from organic manure are just as good as those that grow from inorganic fertilizers. Their crops grow well if compared to those crops that use artificial fertilizer, so there is no need for them to spend large sums of money buying chemical fertilizers. Moreover, she said that the nitrates in artificial fertilizers are soluble and leach easily causing soil imbalances affecting the soil organisms. She added that the farmer’s effort is to feed the soil, which in turn feeds the plants.

In their effort to build seed sovereignty, some Shashe farmers visited and gathered from different parts of Zimbabwe traditional seeds and open polluted varieties. Mr Mpofu and his wife Elizabeth Mpofu, the General Coordinator of La Via Campesina, keep and multiply a wide variety of seeds collected from different areas through exchange and sharing with other farmers. They have over 15 different seed varieties of maize, sorghum, millets, beans, round nuts, ground nuts, cowpeas, pumpkins, melons and many other traditional crops. Most seed varieties have been shared with other farmers within the SFO. The Agroecology School also produces seeds for most local vegetables they grow, a practice learnt from other farmers through horizontal exchange of knowledge.

Most farmers are employing various conservation farming methods to help cope with aridity of the area and other related challenges. Mr Abmelek Mutsenhure’s homestead is located on a sloping rocky area. He uses contours to reduce run-off and also practices minimum tillage. The soil also dries fast and he thus uses mulching to prevent soil moisture loss during the hot days and retain rain water in the soil allowing crops to grow normally even during long dry spells. Mulching is done using maize stalks when his crop is knee high. He practices multiple cropping whereby maize, legumes and other traditional plants are planted together in one planting station. He says that his harvest has improved even since he started farming this way.

Moreover, these farmers keep a wide variety of livestock such as cattle, sheep, goats, pigs, donkeys, chickens, turkeys, ducks, guinea fowl, fish and rabbits. The interdependence the crop and animal husbandry at Shashe is fascinating. The crops and their residues provide feed to livestock, while the latter provide manure and draft power.

This article is based on interviews with and presentations by Shashe farmers during the field visit in September 2014, held on the third day of the LVC Africa Region 1 meeting. The meeting was held in Masvingo district at Shashe Agroecology School, from the 9th to 10th September 2014.