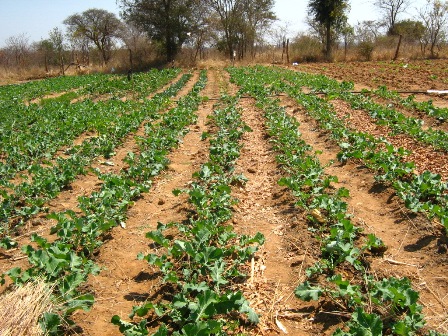 (Zimbabwe, Masvingo, Otober 20, 2014) Food sovereignty as a concept is under debate by various actors in the academia, activists and governments. The focus has been on its meaning and implications, some of which is still contested by some actors. This year a “Critical Dialogue on Food Sovereignty” was held at the Hague in January, attended by various actors to debate this important concept. It’s various outcomes have been published recently by the Journal of Peasant Studies (JPS), of which some of the articles are freely available (http://www.tandfonline.com/loi/toc/fjps20/41/6) though for a short time.

According to Elizabeth Mpofu in her opening speech (Via Campesina at the colloquium “Food Sovereignty: a critical dialogue”) at The Hague, she said that “We are not trying to create the perfect definition, for a dictionary or for a history book but we are trying to build a movement to change the food system and the world”. This has been the case with farmers at Shashe, where food sovereignty, it various pillars, is alive. The farmers have over the years developed ways to make food sovereignty a reality. These farmers produce adequate food for own consumption, the surplus traded locally, value addition processes are underway and are trying to remove the chains of dependence on agro-inputs by adopting agroecology.

Growing for own consumption adequate and culturally appropriate food crops

Besides growing over 10 different crop varieties (maize, sorghum, millets, round nuts, ground nuts, cowpeas, beans, sunflower, pumpkins, melons, most farmer households at Shashe SFO have small kitchen gardens, located very close to the homesteads, where they grow vegetables such as covo, cabbage, rape, onions and tomatoes for own consumption. According to Mrs Mudzingwa, the small farmers are at the forefront of ensuring household food security by growing different types of small grains which give meaningful yields even during droughts. Sorghum, pearl and finger millet, and groundnuts are easy to grow and require less manure. Again, these crops, unlike maize, can easily be processed into meal mealie using a grinding stone, rather a grinding mill.

Shashe farmers keep a wide variety of livestock such as cattle, sheep, goats, pigs, donkeys, chickens, turkeys, ducks, guinea fowl, fish and rabbits. The cattle meat and milk, chicken, guinea fowl and goat meat are commonly consumed sources of protein. According to Mrs Mudzingwa, the traditional chickens are easy to keep because they do not compete with humans for food but eat food which humans don’t eat such as insects and weeds.

The Shashe SFO farmers use traditional methods to preserve vegetables, pumpkin and cowpea leaves to make dried vegetables (mufushwa) which can be stored for long periods without spoiling. They also process sunflower and groundnuts to make cooking oil and butter respectively. For instance, Mr Mutsenhure owns a hand operated oil presser and a peanut butter machine. He said that farmers in Shashe grow sunflower because they know that they are machines that produce oil. Cooking oil is expensive for most farmers and most of them cannot afford it since they are not employed. So it’s cheaper for the farmers bring their sunflower for processing at his homestead. The sunflower cake produced from the extraction of oil is used as stockfeed, mainly fed to the traditional chickens, guinea fowl and rabbits.

Creating a vibrant local market for produce and strengthening interdependence

According to Mr Mudzingwa, farmers grow what they eat, so they are the first market; the neighbor is the second market. Thus, they are building local markets for the local produce. This reduces the need to transport and sell produce to towns, thus retains most cash within the farmer’s purse. Other produce traded locally includes protein rich sources such as meat and milk and chickens. The farmers keep adequate amounts of maize grain in their granaries to feed their families. During times of grain shortage, farmers with surplus grain sell to those who are in deficit. Again, farmers tend to exchange grain for labour, particularly during ploughing and weeding. The other cereals such as sorghum and millets are sold locally, mostly to farmers who brew beer.

According Mrs Mudzingwa, farmers don’t listen to field officers (government agricultural extension officers) who rely on theory teach them about farming but prefer to learn from each other because the SFO farmers have tangible and practical knowledge to share, even through demonstrations. Farmers at Shashe SFO also keep records of all their farming activities to help them to track changes and improvements on their farms. Mr Mutsenhure is the extension officer at Shashe Agroecology School and he leads by example by farming and experiencing challenges the farmers face. This helps him to understand and be a better extension officer to teach and share the art of organic farming.

Living with and benefiting from nature: stone walling and solar energy

Most farmers visited rely on solar energy for lighting and thus cut dependence on candles and paraffin lights. The farmers also conserve local trees, from which they also get their medicines, usually administered by Dr Nago, a traditional healer and kraal head, who is a member of Shashe SFO. Some also grow moringa, a common medicinal tree used to boost a person’s immune system. The moringa leaves are used as relish.

Some farmers use abounded rocks for building purposes, while others use them to terrace the contours in the gardens to reduce soil erosion and run-off water.

This article is based on interviews with and presentations by Shashe farmers during the field visit in September 2014, held on the third day of the LVC Africa Region 1 meeting. The meeting was held in Masvingo district at Shashe Agroecology School, from the 9th to 10th September 2014.