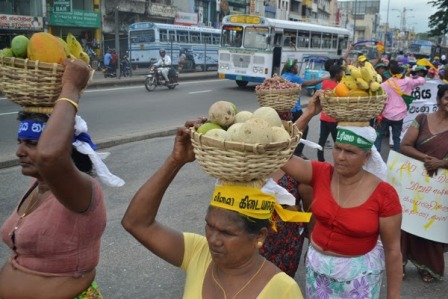 (Sri Lanka, Colombo, October 16, 2014) During World Food Week, the Movement of National Land and Agricultural Reform (MONLAR) held an island-wide Seed Caravan for Food Sovereignty. This campaign stems from the need to address core issues related to the food system in Sri Lanka around the themes of Justice, Equality and Regeneration. More than 50 farmers, women, plantation workers, fisheries and other civil society organizations based across the country participated. The journey of the caravans started from Murukundi in the Northern province in the island and concluded in Colombo after covering a total 25 cities.

Around 600 farmers, fisheries, labors and plantation workers marched in Colombo on the World Food Day (16th of October) to present their demands to the Government for ensuring food sovereignty of the people.  This march was the culmination of the Seed and Food Sovereignty Caravan 2014 which traveled across the country for 6 days.

During 6 days of the Caravan Farmers, fisheries, labors and plantation workers from North, South and East joined their hands for a common struggle for people’s right for their resources and food. They exchanged seeds among themselves to oppose the proposed seed privatization act.

Awareness programs were held in more than 20 cities on the importance of promoting eco friendly food production systems and the rights of people to have safe and nutritious food.

Policy proposals formulated by social movements were handed over to Provincial authorities in around 10 Provincial councils. Participants held number of protests campaigns against land grabbing, water and seed privatization and agro chemical industry which causes severe threats to the health of the people and eco systems.

The caravan was also a great platform for the people in all ethnic groups to join for a common struggle on their rights where they opposed the militarization and corporatization of natural resources which violates rights of the people for their resources and livelihoods. Northern provincial council minister of agriculture, minister of education and Tamil communities from Northern Province participated in the inauguration of Caravan in Kilinochchi showing solidarity among all ethnic groups against violation of their rights. Rev. Mahamankawadawa Piyarathena Thero, convener of the National Movement for Protection of Seeds distributed indigenous seed from south among the communities in North to mark the solidarity.

On 16th, Caravan joined with trade unions, civil society organizations and other social movements to mark the World Food Day. They marched to the Colombo Fort with displaying placards and distributing leaflets. Set of proposals for agrarian reforms to ensure fair and sustainable food system, which has been discussed and endorsed during the caravan, has been submitted to the government after the rally.