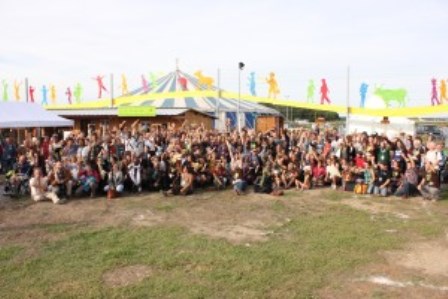 (UK, October 28, 2015) From 24th – 26th September, 250 delegates – including 2 from The Landworkers’ Alliance – from over 20 countries in 4 continents gathered in the south of France for a conference organised by the French Peasant Seed network, Reseau Semences Paysanne.

RSP was started in 2000 at the time that the first crop of GM maize was grown in France and as peasant farmers were losing their legal rights to grow and sell their non-industrial seeds. RSP was launched because they faced a situation where peasant farmers and citizens needed to organise themselves effectively or face losing their seeds, and the country face losing access to non-industrial, unpoisoned food. 15 years later, 80 organisations are working under the RSP umbrella and they are achieving a great deal.

The conference started in the fields with a visit to local farms in the Bearn region – either a market garden, a vineyard or a mixed farm with livestock. We then shared plenary sessions where peasants from Brazil, Algeria, West Africa and France presented the journeys of their seed struggles and seed networks back home.

The French seed network ARDEAR in the Rhone-Alps region presented how they had started 30 years ago from a situation of widespread loss of knowledge, skills and locally suited varieties of seeds. They embarked first to find local varieties that still existed and then sought to bring together peasants and to spread the knowledge of them. Theirs’ is quite a decentralised network now with each farmer cultivating, saving and making available their varieties. Today they are 50 producers who are maintaining 250 varieties of wheat.

They spoke of the importance they had learnt of creating a social movement and that twice a year they organised gatherings. Firstly, during the growing season, to observe each others’ fields and the nature of the plants, and secondly to exchange seeds along with knowledge and stories at the end of the year. They were also carrying out a participatory selection program involving academics who work with RSP because they recognised limits in their local populations.

In another plenary session focusing on land access and peasants’ struggles, Adam Payne of LWA and ECVC presented the historical context and inequality of land access in the UK, and the work that the LWA is involved with to tackle and overcome these prohibitive and corrupt inequalities.

There were also smaller, more focussed workshops, where participants could get into more detailed exchanges in various important areas – participatory breeding and animal biodiversity, autonomy and collective management of the commons, the work of European seed networks and their call against biopiracy and the effects of farmers breeding on varietal diversity of maize landrace populations.

In a session that highlighted some of the complexities of the movement, members of the European umbrella organisation ‘Let’s Liberate Diversity’ shared of how for 10 years they had facilitated very valuable networking between organisations but also had struggled to find a common voice of political unity with which to oppose industry-lobbied oppressive legislation. This is because the European legislation itself is incredibly complex and very few people are able to understand it precisely and talk about it in Europe. Secondly, because the situations and movements in different countries across Europe are very different, we each have different perspectives. Farmers’ organisations, seed-saving organisations and gardening groups each have different interests. In addition, the European directives are interpreted very differently by different national governments, thus creating more hostile or more supportive environments in different places. For example, with a review of the ITPGRFA – the only international treaty which recognises peasants’ rights to preserve, use and sell their own seeds – in Rome this October, the need for European unity between farmers’ movements is imperative.

We come home with a few key messages. Firstly, that in the UK we can learn a lot from our European partners who in some ways are more developed than us. In the establishing of regional seed networks for example, there are networks in Europe that have been functioning for decades in some cases.

Also, our presence is highly valued and is important at the European and international levels, where the greater the representation the more powerful we can be.

It is certainly evident from a perspective such as this gathering, that local movements, struggles and networks must be located within the framework of food sovereignty and the wider international movement in order to be most powerful.

The challenges to find unity across our differences in situations are important ones to overcome. This is not easy, given also our differences of language and culture, but our common goal of food sovereignty is strong enough to unite us.

To finish, here is a sentiment from one of our West African farmer friends:

“people who do not save seeds are not farmers”