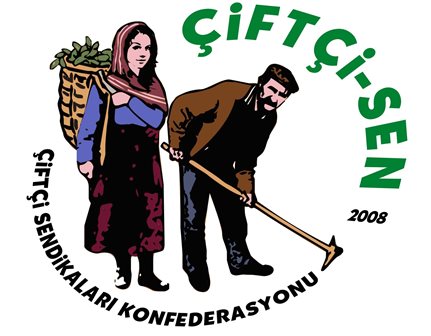 (Turkey, October 29, 2015) We peasants are the ones who watch over a plant as it comes into leaf and grows tall; who plant seeds, seedlings and saplings in the earth; who are filled with joy when we observe their healthy progress; who lose sleep when they fall sick; who care for our animals like our children.

Yet now, we are losing sleep over events in the Middle East and Turkey, we are following developments with great concern. Why? Because war strikes small farmers first. Peasants are being forced to abandon their villages and land. Peasant families are not only losing their land, but also their lives, and they are being forced to migrate. Forests are now being destroyed, the water is being polluted and nature faces ruin.

In June, a bomb exploded in Suruç the midst of a gathering   of young people who wanted to take some toys to children in Kobanî, and 33 of them lost their lives. Instead of finding and capturing the perpetrators of the Suruç Massacre  by the government, we observe an increasing of police operations targeting progressive and democratic forces.  Young people are dying: It makes no difference whether they are soldiers or civilians, Kurdish or Turkish. The peace process has now been declared to have been put “on ice”. The policies of the current  government  are dividing the people in Turkey along lines of race, nationality and religious denomination. Every single social demand, every step for democratic progress is being stifled under oppression.

Then, bombs exploded on 10 October in the midst of a peace  rally that opposed the policies that rapidly polarize the country and lead to a civil and international war. The rally aimed to raise the voice of peace over war and was organized by DISK (Confederation of Revolutionary Trade Unions), KESK (Confederation of Public Workers Unions), TMMOB (Union of Chambers of Turkish Engineers and Architects), and TTB (Turkish Medical Association). Dozens of mass organizations, including Çiftçi-Sen, and left political parties supported the rally. According to official figures, 97 peace defenders were murdered and 400 were injured in the capital city of the country in front of the eyes of the state authorities.

In light of recent events, we demand  that the international community and everyone across the world who cares for justice and peace  put pressure on the AKP government and President Recep Tayyip Erdoğan to abandon their policy of war and anti-democratic practices to Silence the Guns and Stop the Killings!