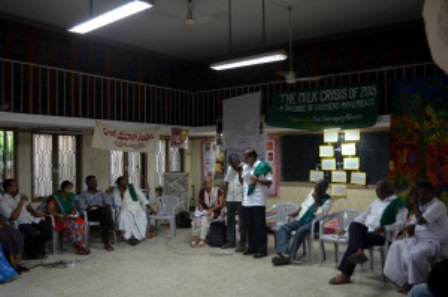 A price war is raging between dairy processors (cooperatives and private companies) of the organised dairy sector, to sell milk to consumers at extremely low prices in urban centres. This has been accompanied by a steep reduction in milk procurement prices paid to farmers by dairy processors and the volume of milk procured by them. The current procurement prices, are far below the production costs incurred by farmers, thus driving them into ever deepening debt. Small and marginal farmers, whose livelihoods depend on selling milk and who are the backbone of the milk market, have been hardest hit. This has also severely affected the people’s milk markets.

At the dialogue, farmers were alerted to some of the key factors driving the destruction of small milk producers’ livelihoods. One of the most significant factors is the increased integration of India’s organised dairy sector into the global dairy markets. A global slump in skimmed milk powder (SMP) prices started in July 2014. The slump triggered a massive decline in Indian SMP exports and a build up of undisposed domestic SMP stocks. Dairy processors have attempted to dispose these stocks as reconstituted liquid milk, in different parts of the country, rather than procuring milk from farmers at fair prices. A critical ingredient of reconstituted milk is butter fat. The accompanying sharp spike in imports of subsidized butter fat primarily from the EU and USA into India, is most likely linked to a huge demand by dairy processors for butter fat,  to reconstitute milk from SMP. Cheap butter fat imports threaten to further depress procurement prices. All of this has and will continue to severely impact the Indian milk producers, pushing them out of production.

Farmers’ movements reiterate the critical importance of livestock in agriculture and assert how in these times of deep agrarian distress, livestock rearing and dairying are the only dependable livelihoods. The Farmers Movements unanimously and strongly condemn the failure of both Central and State Governments to take necessary actions to protect small farmer livelihoods that depend upon dairying and livestock rearing. We also resolve to take this dialogue forward at State and National Levels and organise against the systematic decimation of small farmers livestock based livelihoods and people’s milk markets.