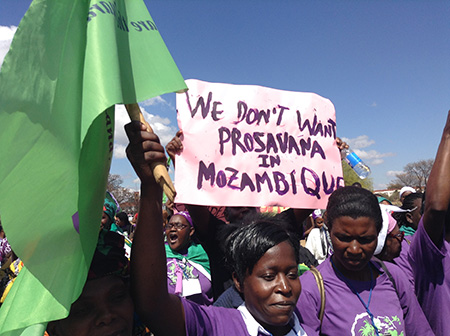 (Bulawayo, Zimbabwe, August 16, 2014) UNAC, the Mozambique Union of Farmers, a member of La Via Campesina regionalises its “NO To ProSavana” campaign. The ProSavana, a mega agri-business project, is located in Mozambique and involves Brazil and Japan. The project, if developed, aims to turn 14.5 million hectares of agricultural land in the Nacala Corridor in Northern Mozambique, currently being used by small-scale farmers, into industrial monoculture agriculture driven by corporations for export production.

UNAC participated in the Southern Africa Development Community (SADC) People’s Summit in Bulawayo, Zimbabwe. It saw the regional gathering as an opportunity to promote and expand its campaign, and to seek and build support from other regional movements against the Prosavana project.

UNAC, during the agricultural and land policies plenary, shared experiences on the project and how some of its farmer members have been affected.

Many participants during the plenary discussions pointed out that the land-grabbing is a phenomenon affecting all Southern Africa. They went further to say that the struggle against ProSavana ‘is not only a national campaign, it is a regional one. We need support from Southern African and other international movements’. Such sentiments resonated with those of Agostinho Bento, UNAC advocacy officer who called for solidarity in campaigning against the program, which could affect the farmers’ livelihood. Agostinho Bento argued that despite denial by the Mozambican government, ProSavana ‘is not about development, it will destroy the local system of food productions and small-scale farmers’ livelihood. We don’t want a development that benefits a few, but rather an inclusive process’.

Participants in the Summit were called upon to help UNAC expose the ProSavana and  the corporations that are seizing communities’ land by engaging in actions to denounce the project in all the SADC countries. Elizabeth Mpofu from Zimbabwe Small Organic Farmers’ Forum (ZIMSOFF), in response to the appeal, said ‘we have to be united in the struggle; if we are divided corporations will take advantage of our situation. It is our right to resist any kind of oppression and colonialism’. 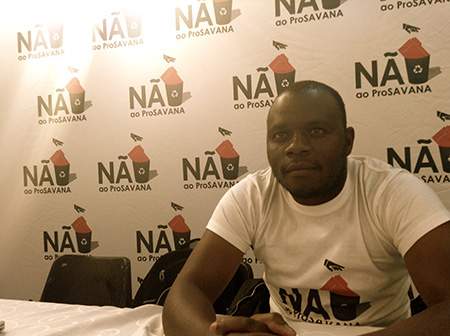 According to UNAC, the campaign against ProSavana at the national level has been a success. Work to connect the struggle to civil society organisations in Brazil and Japan whose governments are involved in the project providing funds and technical expertise is underway. However, support from the regional level is still required, since land-grabbing, a growing phenomenon in the SADC region, places people’s food, water and seed sovereignty are at great risk. Michelle Pressend from the Alternative Information and Development Centre, coordinator of the Southern Africa leg of the Global Campaign to Dismantle Corporate Power urged the participants to think about how to rebuild the collective fight at the regional level against corporations.

To which Elizabeth Mpofu from ZIMSOFF recommended that ‘we need legal counselling, lawyers in our movements, and engage legally in these actions’. Brid Brennan from Transnational Institute (TNI) pointed out that cases like ProSavana are a global model backed by an international legal fortress allowing corporations to seize land and export its crops at the expense of local communities’ livelihood and national food sovereignty. “Thus, our movements need to dismantle it through finding alternative legal structures to defend the people”, she stressed.

Henk Smith from the Legal Resources Centre, emphasised legal measures at our disposal to fight violations of community rights. These are the African Charter on Human and Peoples’ Rights, building the People’s Treaty on the Control of Transnational Corporations and some parts of Customary Law’. But it means that affected communities must take legal action at a local level.

The plenary, discussions also focused on demands to be included in a declaration that was submitted to the SADC Heads of States. The demands included: support food sovereignty; call for policies that promote and support agro-ecology, local food productions, and value local and indigenous knowledge; the development of legal capacity to support local movements; the rejection of GMO (genetically modified organisms); and greater transparency and accountability by the governments.

Watch the video: SADC Peoples Summit – WHY ARE WE HERE?