Home » Report of the VII International Conference of La Via Campesina 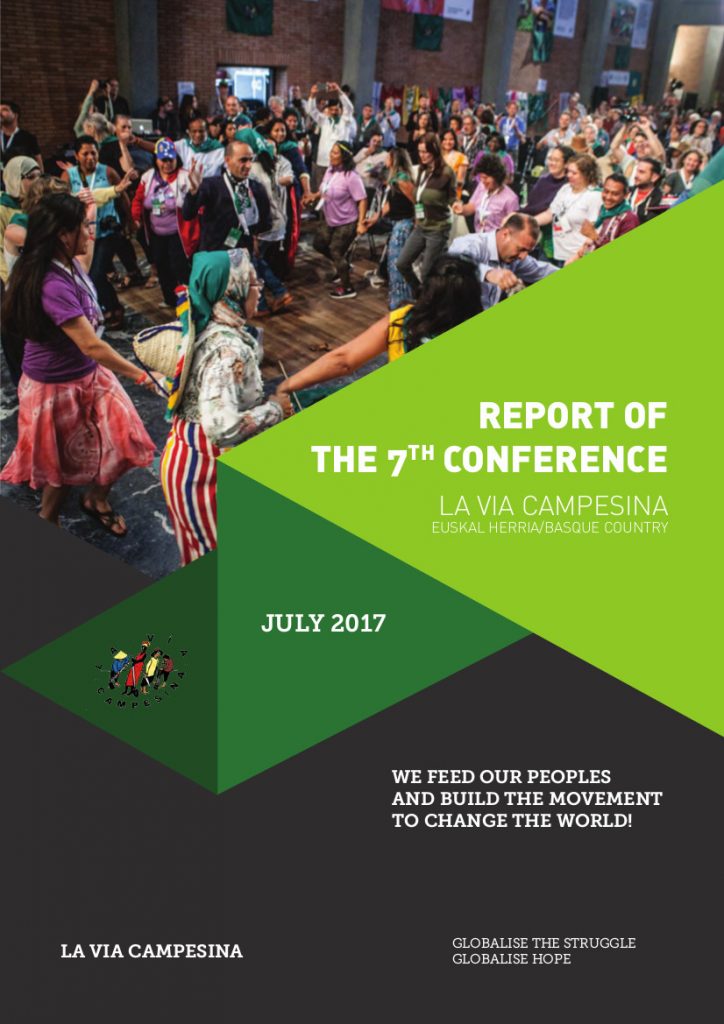 The report from the VII International Conference of La Via Campesina that took place in Basque Country in July 2017, brings to you key moments and important declarations issued by the global peasant movement.

Title: Report of the 7th Conference

We are La Via Campesina

“We feed our peoples and build the movement to change the world!” was the call that thundered from the voices of 700 participants from four continents, gathered in the town of Derio (Euskal Herria) within the Spanish State, from July 17th to 24th, 2017 at the 7th International Conference of La Via Campesina. But what exactly is La Via Campesina, and what brought all these people from all corners of the globe together to share with each other?

In a sense, the very slogan of the 7th International Conference defines La Via Campesina (LVC). Food producers, peasants, small farmers of all genders and ages, fisherfolk, beekeepers, herders, agricultural workers—in short, the people who for centuries have fed and continue to feed the world’s population—make up LVC. Rather than individuals or non-governmental organizations that “represent” peasants and rural peoples, its members are movements and organizations with grassroots members and leadership structures that assure that peasant farmers represent themselves.

A Basque peasant explained the origins of LVC on the first day of the conference:

LVC was born to give a voice to the voiceless, to spark the leadership role of peasant movements. At that moment, it was intuitive: we knew we wanted to have our own voice. The first move was to bring together all movements opposed to neoliberal policies, to construct a peasant culture of solidarity, to create a peasant class awareness. We decided to build identity from the bottom up, not based on patriarchy. We wanted to make an autonomous movement, free from political and economic powers. We wanted to be in the international negotiations on food and agricultural policies. In that moment, we were already a diverse movement, and we wanted to be diverse in all senses.

It was a unique moment. The free trade agreements were well-regarded, even by much of the left; nobody opposed free trade. We, however, saw it as the main instrument of violence against our peasant way of life. The first debate was on the World Trade Organization. We took up that struggle with audacity. We began to break the “there-is-no-alternative” discourse of the corporations, about modernity, about technology, about productivity. It was already clear in that moment, in ’93, the crisis in peasant agriculture had begun to generate poverty and waves of migration. This was the context of the ideological struggle; we challenged the monopoly of thought. Before, there was only one voice in debates on agriculture: that of corporations and large landowners. Today we are many more social movements who struggle against this model. Today, we struggle as one voice against the giant corporations.