Home » Joint Statement by LVC and CSOs: 5th OEIWG session | UN Declaration on the rights of peasants and other people working in rural areas 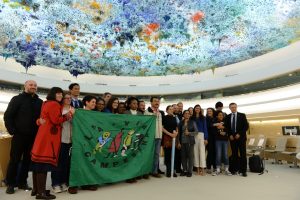 We peasants, indigenous peoples, pastoralists, fisher folk and rural workers, including rural women from around the globe, from La Via Campesina, IUF, WFFP, FIMARC, IITC along with CETIM, FIAN International and other organizations, represent all together billions of rural people. We have been constructively engaging in this process of the UN Declaration on the rights of peasants and other people working in rural areas, from the field, our workplaces around the world and here in Geneva for many years. We strongly welcome the level of constructive support from regions, from Latin America, Africa, Asia, Europe. We especially welcome the warm and effective leadership of the Chair-rapporteur and the Bolivian mission in this negotiation. It is worth taking note that delegates of UN member states have extended their very strong contributions to the process. It appears clear that, aside little exceptions that we all know, nobody denies the need of adopting such Declaration. This process is a demonstration of the effort to continue advancing in the pluriculturality of the human rights system.

As we have been saying from the very beginning, we, representatives of peasants, indigenous peoples, pastoralists, fishers and rural workers, including rural women, are legitimate parties in international cooperation and international solidarity in relation to human rights, food and rural development, since we constitute the sector of the population mostly affected by hunger and malnutrition despite strongly contributing to feeding the world. We, more than 2 billion peasants and other people working in rural areas have great knowledge and experience. We understand the current challenges facing the world’s food systems, and we have ideas for solutions and therefore we are able to contribute to solve those challenges in a valuable manner.

After seventeen years of work, effort and dedication, throughout the world, this process has made our movement and struggle stronger than ever. We are always ready to take our roles in terms of fighting for our human rights. The legal gaps with regard to the protection of peasants’ and other people working in rural areas rights at the international human rights level, need to be filled without further delay.

This is our Declaration, elaborated from the grassroots, we have been and we will keep defending it before this Council and before our national governments until its conclusion in this year 2018. All peasants and other people working in rural areas around the world strongly identify themselves with the content of this Declaration, which will be an instrument to restore and dignify our status in society, to recognize and protect our rights, and to guarantee conflict resolution with dialogue and in peaceful manner. We are confident to see the willingness of States to recognize the crucial rights of their respective rural populations. This is not only valuable for us individually and collectively – but also for all humanity, and it is in the interests of public authorities as well. In fact, the Declaration is going to be useful for governments because it can contribute to reduce social conflicts, food crisis, problems related to drug trafficking, poverty, migration towards cities; fighting environmental destruction and climate crisis; to improve the quality of our food; and to attract and keep more and more young people in farming and in rural areas.

Finally, Mr. Chair, it is worth underlining that what were perceived as new rights by certain countries, are now favorably reconsidered. Thanks to the inputs by peasants, indigenous peoples, pastoralists, fisher folk and rural workers, including rural women and other people working in rural areas from all over the world, and also legal grounds put forward by the experts, these rights are gaining more support in the Declaration, as they are specifically referred to in international agreements and a growing number of national legislation. Our grassroots testimonies reinforce the state of emergency for recognizing these rights in the Declaration without any further delay.

As we all stand here, in full knowledge that human rights prevail over profit and economic interests, as well as the alarming violations of the rights of peasants that occur systematically throughout the world, we call on States to unite in order to recognize and further guarantee the realization of the rights of peasants and other people working in rural areas. States can no longer postpone the Declaration. The time is ripe for the recognition and protection of our rights. Let us work to finalize this process and adopt this Declaration this year.

Thank you very much.