Human Rights Council, 33rd Session, Item 5 – Human Rights bodies and mechanisms – General Debate on the Report of IGWG on rights of peasants and other people working in rural areas (A/HRC/33/59) 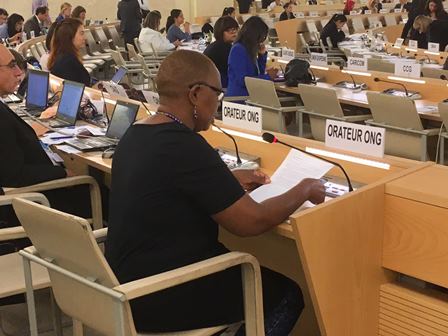 President of the Council,

I am Elizabeth Mpofu, the International Coordinator of La Via Campesina.

Together with International Association of Democratic Lawyers (IADL), we would like to strengthen further our commitment to the establishment of the draft declaration on peasant’s rights, as I want to remind us on following:

The term Peasant that we want is inclusive is as defined in Article 1 and its meaning signifies a special relationship of peasants with land which defines their social and economic rights political identity, including also their cultural and religious life in rural areas. Moreover, their rights are unique and require recognition and urgent protection in the current context “of the need to feed 9 billion people by 2050”. This definition is to develop a protection for the very group which contribute greatly to the realisation of right to food around the world, whilst they still have to face prejudices and direct discrimination caused by wider grab of natural resources and of biodiversity. Moreover, the peasants’ contributions to the rich and diverse seed go unrecognised.

Food Sovereignty is defined concretely in Article 5.4 as the right of peoples to healthy and culturally appropriate food produced through socially just and ecologically sensitive methods; entails the right to participate in decision making and to define own food and agricultural systems. It responds appropriately and adequately beyond the issues of food security which the recent food crisis debunked. In light of this, to take food sovereignty out of the declaration as some countries suggest would to some extent, perpetuate the causes of that crisis and moreover undermine efforts to preserve biodiversity and fight against climate crisis among other things.

Food sovereignty recognizes and affirms the values of democracy on which the State is founded on: it is the people who define the agenda and the State implements and protects such an agenda not the other way and not by a few corporates.

On the right of rural women and gender equality as defined in Article 6 is of utmost importance if one considers that women constitute the bulk of the food producers and are the pillars and foundation of the family. We cannot continue to ignore them if we do then we are not in any way different from one who builds a house on sand.

Right to means of productions defined in article 21 is critical to building Food Sovereignty. Thus, current violations of peasant rights in the global north and global south (land grabbing, exclusionary policies with regards to markets and selective agricultural support and restrictive laws with regards to which seeds are good and should be grown; criminalization of peasant protests and their killings), should cease henceforth. Therefore, peasants and people working in rural areas are determined to contribute strongly to the life of our world. The process and recognition of their rights is the recognition of this fundamental contribution.